You may have seen the an illustration of a bicycle based on the Pi symbol dreamed up by Malaysian artist, Yau Hoong-Tang somewhere. Now, meet the actual Pi Bike. Yes. That’s right. Someone actually turned the concept into a real, rideable fixie. Launch in time to mark the Pi Day on the March 14 (3/14, get it?), the Pi Bike was designed and built by London-based artist Tadas Maksimovas and Dutch designer Martijn Koomen, and crafted out of carbon fiber material.

Prior to it being realized in the super strong and lightweight material, scale paper models, as well as full size cardboard model were built. After proving that Pi symbol is actually suitable as a bike frame, molds were made to cast the frame in resin to make the prototype before eventually casting in carbon fiber. The result is a surprisingly cool and yet weird looking pedal-powered two-wheeler. 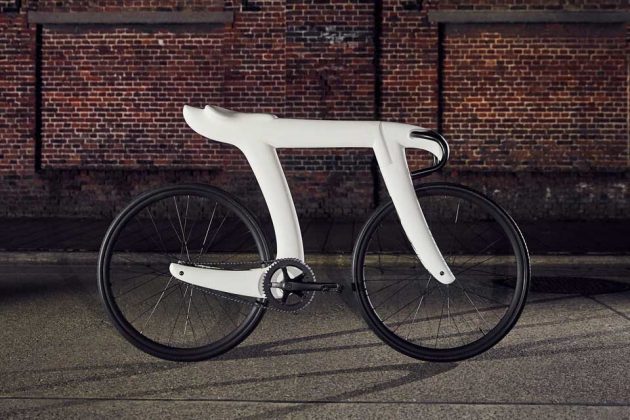 Apart from the frame, the rest of the hardware are fairly standard and they includes an 8bar Super crank set, Nitto track racing bars, and Hydra fixed-gear wheels. The making of the Pi Bike was quite a daunting endeavor, as the designers agree that it was as easy as a Pi (pie). The Pi was launched with the help of WE ARE Pi on Pi day which happens to be the birthday of Albert Einstein. Damn, we saw this awesome bike on Pi Day, but we didn’t act on it until today. Sorry. Our bad. So, anyways, happy belated Pi Day, ya? Skip head for a video on the birth of the Pi Bike.