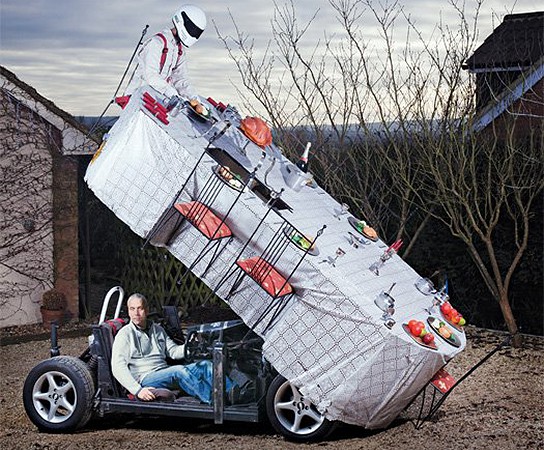 from the guy who gives you the world’s smallest car (Wind-up) and the world’s lowest car (Flatmobile), comes the world’s fastest furniture: a dining table set up, aptly dubbed the ‘Fast Food‘. Perry Watkins is no strange in creating weird vehicle and this time round, his Fast Food has achieved the world record speed of 113.8 mph. at a glance, this dining table set up looks to be just another, well, dining table set up for six complete with champagne, potatoes, gravy and roast chicken to boot – all of which are fake items, of course. however, lurking underneath this tantalizing set-up is a 3.5-liter Rover V8 engine cannibalized from a Reliant Scimitar Sabre and a nitrous oxide (NOS) injection system that is good for a century sprint in just four seconds.
[ad#Google Adsense-text-468×60]

to add to the realism, Perry used real utensils on the table, as well as a variety of authentic-looking food props. a mannequin equipped with helmet and race suit completes the set-up. the helmeted mannequin gives the illusion that it is the driver of the dining table. smart. so where’s the driver? at a touch of the button, the table pivots up on one end, and Perry slips in to take the helm, underneath the dinning table with his head protruding beneath a plastic chicken on a platter. the plastic chicken has another function: Perry hooked up the nitrous system excess air exhaust through the fake chicken which results in “a six foot plume of white smoke comes out of the chicken’s backside.” smoking chicken, anyone?

NOW READ  Secretlab Cyberpunk 2077 Edition Gaming Chair: For Gaming Like You Are In Night City

oh, did we mention that the Fast Food is totally street legal too? amazing, huh? it even has a license plate mounted at the front of the dining table. check out some images, and a video of the Fast Food in action after jump.