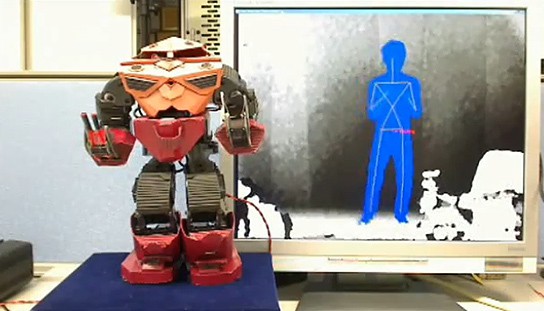 yet another Kinect-hack that controls an android but this time, Watani Yohizaki of Asura Engineering took it further with the Asura’s code that allows to robot to keep adjusting itself automatically to compensate the motions it makes to prevent itself from being thrown off balance and fall. articulations are not restricted to just the arms, the legs are completely articulated and balanced as demonstrated in the video, all thanks to power of the code. the robot in question is in the guised of HPI GR-001 which turns out to be a standard edition machine which requires no modding. wow. i totally impressed.
[ad#Google Adsense-text-468×60]

could all these Kinect-hack pave the way for more advance remotely operated robots? i believe so. perhaps, the soldiers or rescuers of the future could be the ‘avatar’ drivers for the machines, instead of some blue Na’vi tribe beings. we already have UAV and UCAV where pilots don’t actually take to the sky and so perhaps, a robot that roves around without a driver isn’t that far fetch after all. don’t you think so?