I can’t think of anyone who love sloth, let alone wanting to dress up as one for any costume party. But here we are, seeing a costume right before our eyes. Yes. This is a sloth costume and it is so life-like that, for a moment, I thought it was a real sloth. I grasped at the size of it. A human-size sloth! Alas, it isn’t a real sloth. It was a costume created by Berlin-based super talented costume designer, sculptor and prop maker Karoline Hinz. 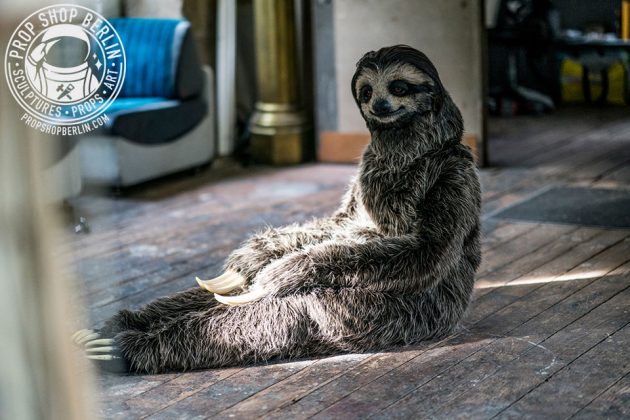 I have no idea why a sloth suit, but according to Karoline, she has the knack for bringing even the most absurd ideas to life. Well, I guess, this sloth suit is one of the absurd ideas she had swirling inside her artistic mind. You know what I think? I think this sloth suit is strangely awesome as it is creepy. I mean, seriously. Imagine a sloth this big. That’s insane. May we suggest that you don’t roam around the neighborhood with this suit on cos’ you’d be expecting tranquilizer darts coming for your ass.

At least you won’t be making a blazing 2-3 meters per minute top speed like a real sloth does and so, you should be able to get away. Then again, you won’t have the opportunity to do because, Hinz has specifically stated that this suit is not for sale. However, she will gladly do any commission work, or as she put it, she is glad to help others realize their absurd ideas. It took Karoline eight weeks to complete the suit which involved sculpting, molding and casting the face in silicone and subsequently, planting hair into it and the emotive glass eyes.

Clearly, this lady has magic hands and thanks to her magical touches, she has accumulated an impressive portfolio which include a massive 20th Century Fox-commissioned Kung Fu Panda Masks, props for experimental electronica band Bodi Bill, and chainsaws from the FPS video game DOOM commissioned by Bethesda to promote the video game Fight Like Hell in Germany. Anywho, next you see a giant sloth roaming the streets of Berlin, don’t be alarmed. It could be Karoline as the sloth chilling out.