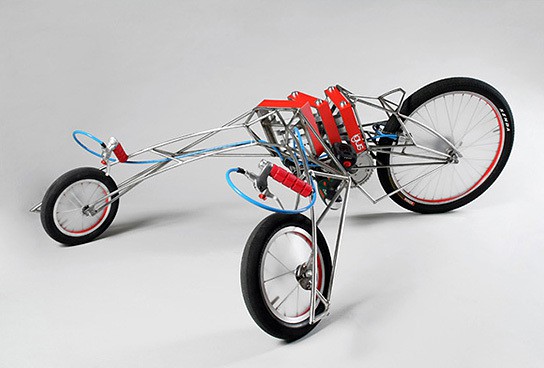 besides the usual mode of transport, there are hundred and one ways to transport yourself from one location to another. there are skateboards, skatescooters and then there is The EX. The EX is an experimental eccentric vehicle that requires the driver to be in a rather compromising position. similar to the StreetFlyer that we featured last month, the driver lies headlong on the three-wheeled vehicle, but unlike the StreetFlyer, it has powered motion by the way of a pair of 18-volt Bosch electric drills. absolutely weird. i know. do not underestimate the power of drills, as this baby is capable of making a top speed of 30 km/h. however, we wouldn’t expect a couple of battery-powered drill to have any impressive range. if you have used a battery-powered drill, you would know why.
[ad#Google Adsense-text-468×60]

there are no visible turning joints at the front of the vehicle. so how does it steer? well, steering is by the back wheel via a specially developed spine-shaped joint which reacts to the driver’s leaning motion. clever indeed. other than the custom spine-shaped joint, the development team uses modified bicycle parts for the construction of The EX. aesthetically, The EX was purposely left uncovered to show-off the vehicle’s inner workings. which is a nice idea but i thought a streamlined fairing would look awesome on this vehicle. the prone position of the rider gives the vehicle a racy feel, but i guess, staying in this position for long might just hurt your back.

The EX via Oh Gizmo!