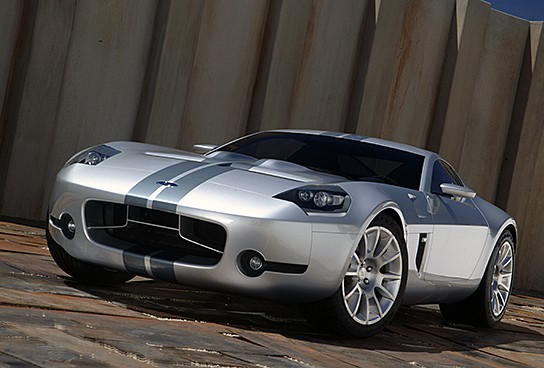 in the upcoming Monterey auction organized by RM Auctions, Ford Motor Company is presenting an opportunity for motoring enthusiasts to own two unique Ford concepts. concepts going under the hammer are not a rare thing but concepts that are from present time is far and few between. the pair of concepts in question is the 2001 Ford Thunderbird Sports Roadster Concept Car and a race-inspired 2005 Ford Shelby GR-1 Concept Platform, and they will be presented ‘without reserve’ during the auction, with proceeds going to the Juvenile Diabetes Research Foundation (JDRF).
[ad#Google Adsense-text-468×60]

first unveiled in the 2002 NAIAS, the 2001 Ford Thunderbird Sports Roadster Concept Car is fitted with a 3.9-liter V8 engine mated to an automatic transmission and features four-wheel independent suspension, and all-round disc brakes behind those 18-inch wheels. drawing its inspiration from the 60s style, the Roadster was given a vivid red paint job with a contrasting “ceramic” white leather interior which are similar to the automobiles styling of the 50s-60s. instead of chrome parts, the interior sports brushed aluminum inserts, completing the look that you know that is a 21st century’s 60s automobile. though it is a full-fledge functional car, this T-bird is, however, not a road-legal vehicle. the 2001 Ford Thunderbird Sports Roadster Concept Car is expected to fetch between $125,000 to $175,000.

next up is the 2005 Ford Shelby GR-1 Concept Platform, which was first unveiled at the Pebble Beach Concours d’Elegance in August 2004. styled with a long outstretch bonnet and fastback design, the GR-1 is based on the Ford GT platform and drew its inspiration from the 1964 Shelby Daytona Coupe. only two of such beautiful examples were built and sitting under its macular arches are 12-spoke 19-inch wheels – also inspired by the original ’64 Shelby. it is also worthy to note that this is a platform model car, meaning that it does not contain any engine, drive train or interior. just think of it as a life-size car model that’s probably going to take up a whole room to display. the 2005 Ford Shelby GR-1 Concept Platform is expected to fetch between $150,000 to $200,000.

the Monterey auction, organized by RM Auctions, will be held on the August 19 and 20, 2011 at the Portola Hotel & Spa and Monterey Conference Center. a few more look at these two gorgeous cars after the break.