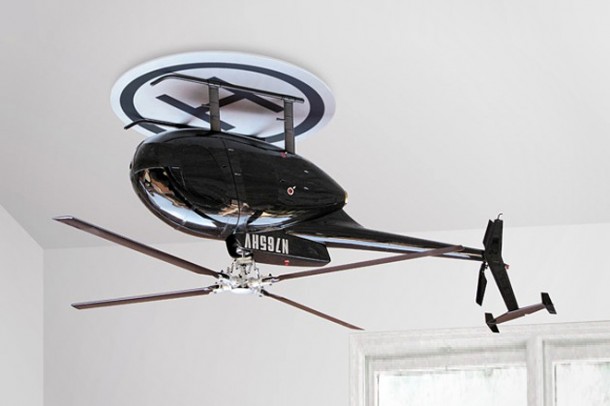 with the global warming catching up with us, a ceiling fan is hardly enough to cool us down in any hot summer days. however, if you are undaunted by this fact and insisted on installing a ceiling fan in your humble abode, then you might as well do it with a huge leap in style and this Upside Down Ceiling Fan is the fan that will let you do that. the official name, Upside Down Ceiling Fan, doesn’t really tell you much but the image is pretty much self-explanatory. this fan takes on the design of the legendary Hughes/MD 500 helicopter in 1:6 scale and is crafted in fiberglass with carbon fiber blades and has an aluminum internal structure. a standard three-speed motor powers the fan, which is controllable by an included remote. the fan comes in shiny black with a silver base (the landing pad, complete with the letter ‘H’). perfect for any aviation enthusiasts or anyone who just want a conversational piece up on their ceiling. unfortunately, this item appears to be a concept that made its debut at the recent 2012 Milan Design Week, therefore it remains a mystery if it will ever see the light of production and even if it does, it’s not going to be anywhere near affordable.