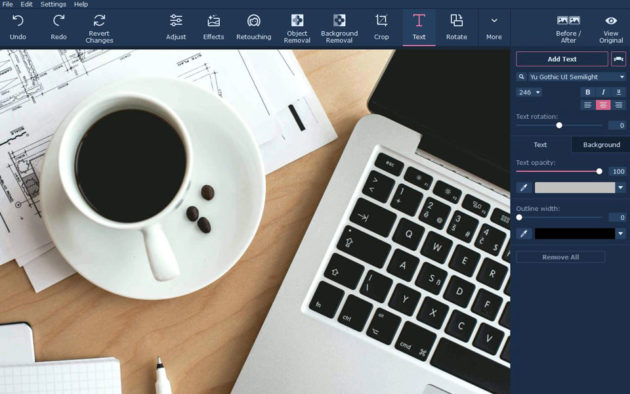 The Movavi Photo Editor
While the Movavi Photo Editor seems to have arrived late to the party of imaging editing apps and software, it still has some features that could easily make it the top pick for professionals. The photo editor has quite a few good features it should be proud about, mainly because all of them offer the user value at some stage of the photo editing process.

The Features
So, let’s dive right into it. The first unique feature that the Movavi Photo Editor offers users is called ‘Object Removal’. As the name implies, the feature allows you to define a particular area of an image which is then instantaneously removed.

The Brush Tool
Everything from photobombing strangers at the mall to annoying facial blemishes can be removed with a simple stroke of the brush tool, which makes it one of the top five tools in the Movavi Photo Editor. Apart from this tool, there are also a lasso tool and a magic wand tool, both of which do pretty much the same thing, but for a more accurate removal of anything that you do not wish to see in your photos, the brush tool is away to go.

Surprisingly, the end result of using this tool is more than satisfactory. Once the object you want to remove has been eradicated by the tool, it leaves no signs of it whatsoever. This is also partly due to the inclusion of a variation slider which allows the user to have complete control over the brush tool while fixing the image.

Background Removal
Another surprisingly effective feature of the Movavi Photo Editor is the background removal tool that’s able to isolate a subject from its background, before removing the background altogether. It allows the user to define not only the object that they wish to remove, but also the subject they wish to keep in the photo. For best results it is advised that the user zoom in as much as they can while using the selecting tool to chop out the undesired object from the image.

The Photo Retouching Tool
Once you are done with removing objects from the image, you can use the retouching tool to improve the photo’s quality before it can be saved. The retouching tool allows the user to make subtle changes to an image such as removing the shine from the cheeks, or removing wrinkles. While the tool’s results are a bit harsh, there does seem to be some intelligence built into the feature.

Overall, the Movavi Photo Editor is an effective tool that could be even more effective if you have time to practice your photo skills.