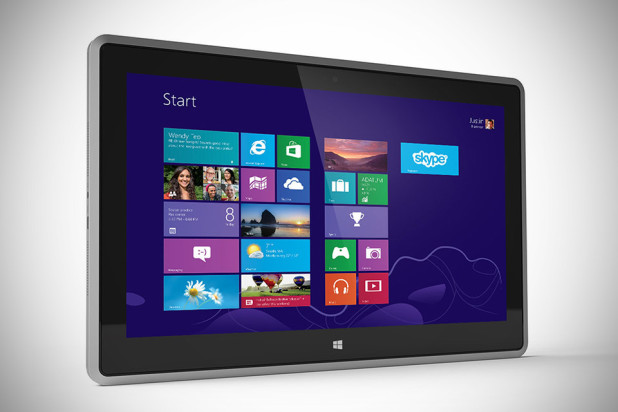 we can see major manufacturers are warming up to the idea of a Windows 8 slate. it took quite a while but it is really warming up. how we know? when Vizio is also jumping into the Windows 8 bandwagon with its first Windows 8 Tablet PC – aptly dubbed the Vizio Tablet PC. no fancy namesake, so that you know exactly what it is. running off Windows 8 (obviously) and powered by a 1GHz AMD Z60 dual-core processor (as opposed to the current Windows slates’ favorite of Intel Atom flavor), the Vizio Tablet PC features a expansive 11.6-inch multitouch display (typical of a Windows 8 tablet these days) bolstered by AMD Radeon HD graphics for a full 1080p HD resolution, SRS Premium Sound HD to match up the sound department, 2GB of RAM, 64GB SSD, a 2.0-megapixel front-facing camera, micro HDMI and a micro USB. exact physical size and weight of the tablet are not known but what we do know is, despite appearing ‘thick’ from the images, the Tablet PC is actually just 0.4 inches thin. this Windows slate turns out to have an unusually wide bezel that sort of forms a frame to its large display but other than that, the tablet appears to be rather minimalist as far as design aesthetic is concerned. the Vizio Tablet PC is expected to be available end of March this year with a yet-to-be-determined sticker. take a few more look after the break.