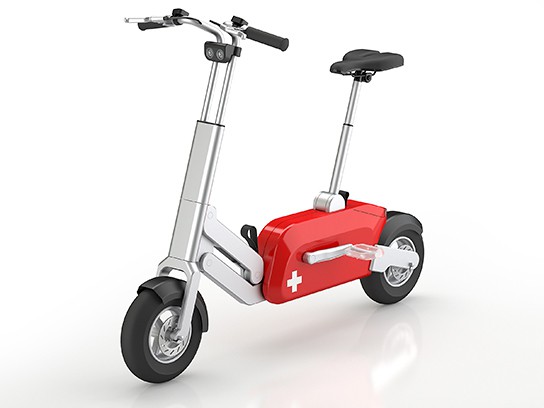 we are fans of electric-powered bicycles and we also love the idea of foldable bikes. Voltitude is the bike that combines both our loves: a foldable electric-powered assist bike. the company behind this cute little transporter is the Swiss company, Voltitude. inspired by a city scooter, the Voltitude bike has low center of gravity and small, wide wheels suited for urban riding. unlike the perceived notion of an electric bike, the Voltitude is an electric-power assist bicycle which means it does not have an accelerator. rider pedals the bike as per a normal bicycle and a built-in 250W electric motor amplifies the pedal input which is capable of reaching 25 km/h. it could afford a faster speed, if you pedal harder.
[ad#Google Adsense-text-468×60]

25 km/h may sounds like nothing but trust me, it is quite something for a vehicle this small and thus, power hydraulic disc brakes are employed to give it the necessary stopping power. constructed of mainly aluminum, the bike weighs between 18.5 to 22 kg (excluding battery) and is foldable for easy storage. it’s not exactly light weight, so user will be glad to know that when the Voltitude is folded, it can push or pull like a wheeled luggage with its handlebar and a special “walk” button on the handlebar activates the motor up to 6 km/h on full electrical mode, thus the rider can now walk along aside its ride without exerting any push or pull effort.

NOW READ  Tesla Model B Concept Is Not An Official Tesla Electric Bicycle, But It Is Beautiful Nonetheless

the highlight of this vehicle is perhaps its patented folding mechanism, EasyFold. with this mechanism, the bike can be folded and unfolded in just one second. check out the video of the EasyFold system on a former Voltitude prototype in action after the break. the Voltitude bike is slated to be available from September 2011, however, there is no word on its pricing. interest parties can make their no-obligation pre-order on Voltitude website.