Portable SSD is not new, but as far as Western Digital is concern, it is a very new product. We all know that SSD, or solid state drive, is obviously the future and its proliferation into portable storage inevitable, but don’t ask me why the hard drive giant (and now, also a flash drive giant) did not jump into it sooner. Anyways, they do now with the announcement of the company’s first-ever portable SSD, aptly called My Passport SSD. Duh. So what can you expect from this WD-typical-kind-of-stylish portable SSD that borderlines a flash drive? 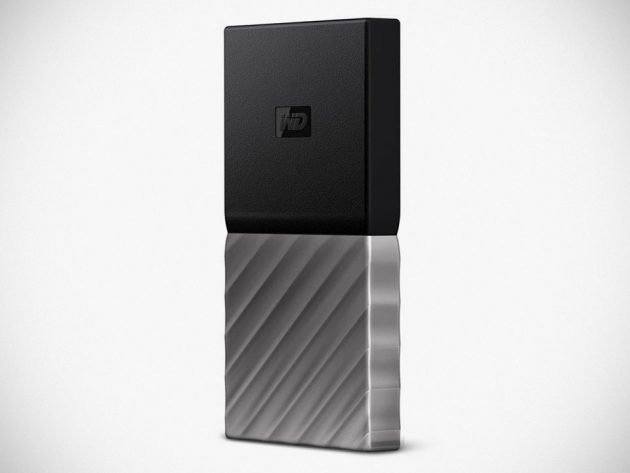 Well, first and foremost, it is fast. Though not a reigning speed demon, it still offer a pretty up there sequential read speed of up to 515MB/s when data is piped through the USB Type-C port. And then there’s the built-in 256-bit AES hardware encryption to safeguard whatever digital stuff you packed it with and it is of course, outfitted with the speedy, modern day multipurpose port called USB Type-C. It is compatible with USB 3.0, 2.0, USB-A and it is also USB 3.1 Gen 2-ready too. And oh, did we mention that it is one tough little fellow?

Despite its dainty appearance, it can actually survive a drop of up to 6.5 feet (1.98 meters) to live another day to be packed with more data you may have. Speaking of data, Western Digital My Passport SSD Portable Hard Drive is available in 256GB, 512GB and 1TB capacities, and is available in the U.S. via BestBuy online and globally, through select e-tailers and retailers this quarter. As for the prices, the 256GB model is priced at $99.99 a pop, while the 512GB and the 1TB versions command $199.99 and $399.99, respectively.