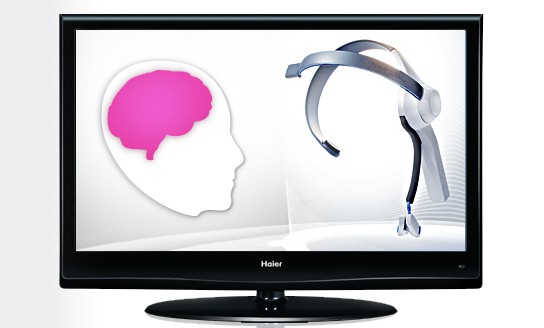 this week China-based Haier debuts the world’s first Brain-Computer Interfaced Technology (BCI) Smart TV at the IFA Messe Berlin Conference. as the name suggest, this technology lets user user their brains to interact with the Smart TV using NeuroSky ThinkGear Technology. yes, it is yet another technological advance to make use even lazier. though it looks like the brain-control functionality is more for controlling TV applications, allowing “users to develop control over their concentration and relaxation abilities through entertainment applications.” it sure does sounds like switching on/off and navigation through channels might not on the menu for now. this advanced control Smart TV will be demoed at the IFA Consumer Electronics Unlimited Conference from September 2 to 7. if you are a fan of mind control stuff, you will be glad that this Haier product is not a concept. it is slated to hit China’s market this October but pricing is yet to be confirmed. on a side note, i am not sure if i actually want to spend any bit of my brain juice just to switch a channel which is usually a mindless affair.
[ad#Google Adsense-text-468×60]