while jetpack that takes to the sky is slowly becoming a reality, a jet pack that gives you same freedom underwater is unheard of. but that is set to change if UK-based startup SCP Marine Innovation has their way and the device which the firm is touting is the X2 Underwater Jet Pack – if the firm’s equity crowdfunding campaign is a success. unlike the jetpack of the air, the X2 uses high-performance marine thrusters known as Hydra attached to each of the arm, thereby resulting in a vectored propulsion and as such, allowing for complete freedom of maneuverability while underwater. just think of it as flying underwater, or if you are more imaginative, think of it as a potential Iron Man of the water of sort. the system is powered by the latest in lithium battery technology, coupled with digital motors and a wireless control system, and is capable of achieving a speed of 6 mph.

interestingly, the Hydra thruster is modular with a unique mounting system, which allows it to be detached and used in a wide range of application such as turning surfboard into a powered surfboard. the X2 is still evolving and the team is currently working on incorporating sensors, GPS, data storage and wireless capability that would, presumably, allow the wearer to log his or her adventure such as acrobatic maneuvers and share them with their friends. details are pretty scant for now, but one thing for sure is, these guys already have the working prototype and as far as we can see, it looks like the system is working as it should. in all honesty, a jet pack for underwater alone doesn’t draw us as much, if not for the super cool X2-powered futuristic diving suit called Nemo (pictured below).

but before all that becomes a reality, SCP Marine Innovation would need some financial backing to see the company through the first six months of 2014. you can support them by backing up their endeavor through equity crowdfunding website ShareIn, in return for a slice of equity. the targeted amount of £42,000 and £72,000, with the latter being the stretched target, will be used to finance the firm’s operation, including an initial launch of the X2 Underwater Jet Pack on Kickstarter in January and the development of two more new Hydra-powered products, and of course, working towards bringing the first commercial version of the jet pack to the market in September 2014 for about £3,500. hit the jump for a short clip of the prototype X2 Underwater Jet Pack in action, or hit up the source link below to find out how you can be part of this exciting new water sports product. 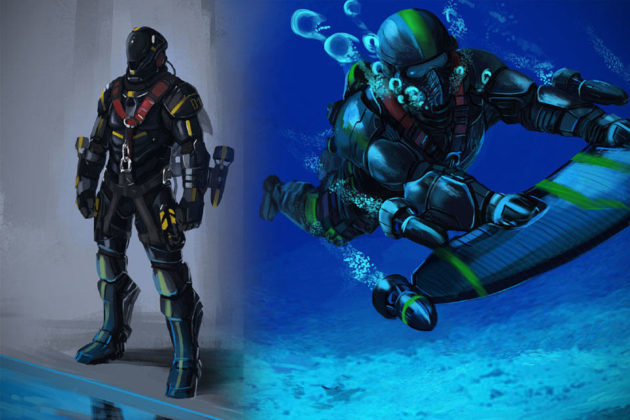 Source: ShareIn
via The Next Web