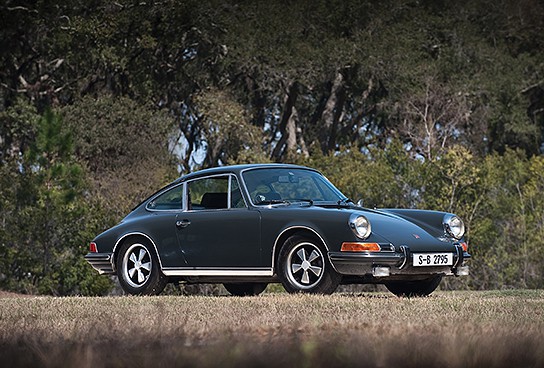 if owning a piece of motoring legend is your kind of thing, then you will be glad that the car that once used in the movie Le Mans (1971) by the king of cool, Steve McQueen is going under the hammer next month at the Monterey Auction to be held at the Portola Hotel & Spa and Monterey Conference Center. this is the actual car that opened the scene in the 1971 film and was delivered new to McQueen on the set (and later own by McQueen). it was built to the highest possible specs available from Porsche and has had four owners since after the movie.
[ad#Google Adsense-text-468×60]

this 1970 Porsche 911S is powered by a 2,195 cc (2.2-liter or 133.9 cubic-inch) horizontally opposed (otherwise known as Boxer engine) six-cylinder engine mated to a five-speed manual transmission. the engine has a redline pegged at 7,300 rpm and pushes out 200 horses (149 kW) at 6,500 rpm – a pretty significant number for its time. the car also features something which is rare in its time and that is independent suspension for both front and rear. apart from one time repaint in its factory color (slated gray), reupholstered front seats, new shock absorbers and a new windshield, everything else about this car is completely original. heck, it is still wearing its factory-installed Fuchs alloy wheels.

the 1970 Porsche 911S Steve McQueen Le Mans movie car is set to be auctioned at the upcoming Monterey Auctions organized by RM Auctions, on the August 19-20. check out more images of this awesome classic 911S after the break.