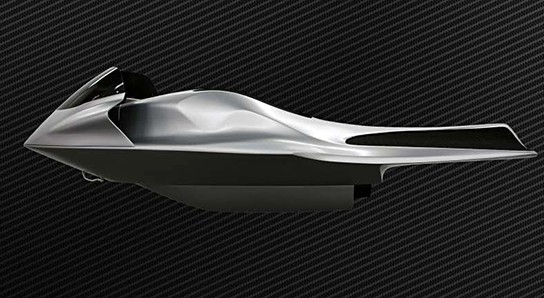 we might not have seen a whole lot of jet skis in our career here but from the handful that we have seen thus far, the Exo Concept EXO is perhaps the sleekest of all. the EXO bends two traditional rules of jet ski: prone to ride, instead of seated or standing, and it is earth-friendly electric powered. lets just say that on the aesthetic perspective it definitely scores for its aerodynamic low profile design and it is clad in the ever alluring carbon fiber. though i am not too sure about that prone position concept which doesn’t look like the body have any cushion to protect the rider. this sleek jet ski is equipped with quick charge batteries that juice its electric motor, which in turns powers a silent water jet propulsion system that enables it to cut through the water with a speed of between 15 – 27 knots (28 – 50 km/h).
[ad#Google Adsense-text-468×60]

the vehicle has three options of electric motor to choose from, starting with a 3.5 kWh motor, a 4.5 kWh and finally, a top-of-the-line 7 kWh motor, and a choice between reinforced ABS or carbon fiber for the shell. now, here’s the good news for you folks with huge pockets – you can actually pre-order this watercraft from Exo Concept now with expected delivery date in Q1, 2012. the Exo Concept EXO Electric Jet Ski carries an entry level price tag starting from €7,290 or US$9,954 according to current exchange rate. i suppose that this price is for the entry level electric motor with reinforced ABS shell model which Exo Concept is offering. i would imagine the carbon fiber with the top-of-the-line electric motor will be very much dearer.

NOW READ  Want To Play Water Sports? Here Are Some Helpful Tips
[UPDATE – September 14,2011 – videos of the Exo Concept EXO! check them out after the break.]