It is no secret that commercial jet makers have been wooing airlines with aircrafts that can carry more. But this latest seating arrangement patent filed by Airbus takes the cake as the most evil plan of all. Yes. We said ‘evil’ because if the present cramped seating arrangement in the economy class isn’t bad enough, Airbus wants to eliminate the overhead storage and use that same space for what they called ‘mezzanine’ seating. You know, ‘mezzanine’ as in a second story. So, yeah, Airbus is indeed proposing the literal stacking of passengers to, as the company puts it, “make optimum use of the available space in a passenger cabin.” 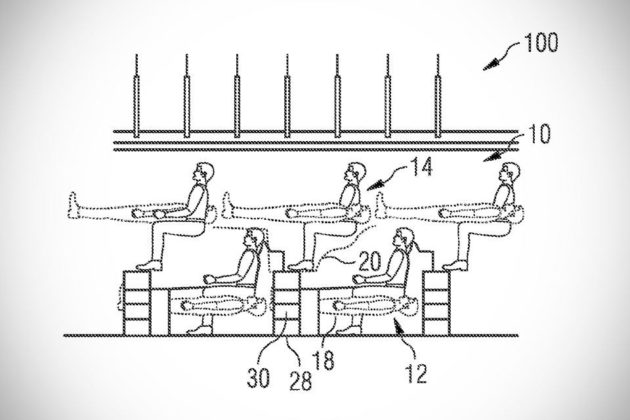 As it is, the overhead storage is barely enough and now Airbus wants to have more people in there? Seriously, I don’t quite under the logic. Isn’t it logic that more people would mean more baggages, which means the need for more carry-on storage? Or perhaps, Airbus is talking about an entirely new class of seats, where there would be a strict no carry-on rule? Whatever it is, one thing for sure is, we do not fancy a seating arrangement where we may be facing someone else’s butt – even if in reality there’s a seat between us and he/she.

Furthermore, the cramp condition in the cabin often results in spillage of stuff during meals, which would mean the lower tier passengers will ensure the risk of such incidents. Granted that Airbus’s proposal does not quite put a seat directly on top of another, but it is still weird to have your feet in such close proximity to another person’s head. That, and the butt thing, makes us cringe at this seating arrangement patent. We can imagine flight in such a seating arrangement would be the worst experience at 30,000 feet if the upper tier passenger has serious feet odor issue. Just saying..

There is consolation here though, well, at least for economy class folks cos’ according to Wired, Airbus thinks “this arrangement may be ‘suitable’ for business class as the seats could recline as much as 180 degrees.” However, we are not going to dismiss this idea entirely. If the tiered seating arrangement is presented in a cocoon-style, like those envisioned by factorydesign, then perhaps, things may not look so bad.