If you fly a lot, you are inevitably part of the environmental problem because the aircraft you fly in generates tons of CO2e per trip, but that could soon change – thanks to the world’s first renewable, alternative jet fuel developed by Washington State University-led Northwest Advanced Renewables Alliance (NARA). This groundbreaking creation, which was formulated from forest residuals of harvested managed forests, is “chemically indistinguishable” from regular jet A fuel and was put to use on an Alaska Airlines‘ flight from Seattle-Tacoma International Airport to Reagan National Airport in Washington D.C. yesterday. 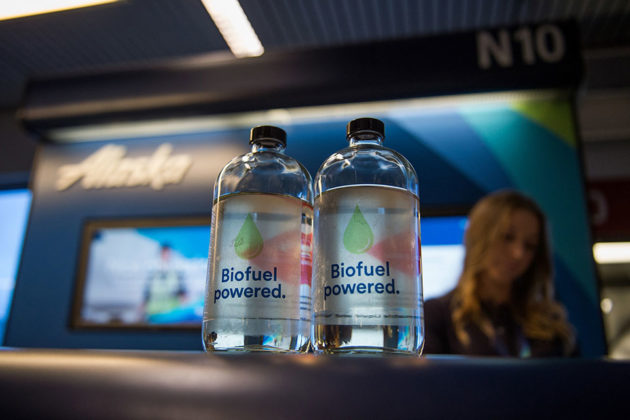 Granted that Alaska Airlines’ flight was not on 100 percent alternative fuel; it was travelling on 20 percent blend, but we count that as a good start, and a fabulous news for the environment as a whole. However, admittedly, a single aircraft fueled with 1,080 gallons of biofuel isn’t going to make a significant impact as far as overall greenhouse gas emissions is concerned. But if Seattle-Tacoma Airport could substitute 20 percent of its fuel with this biofuel, then it could potentially slash greenhouse gas emissions by as much as 142,000 metric tons of CO2, which is equivalent to removing around 30,000 passenger vehicles from the road for one whole year. And that, folks, is a significant number that we can count on for a more sustainable future.

Imagine if the airports around the world goes on alternative fuel too, then we’d say the future of our world is not so bleak after all. But then, there will be the question of the source materials such as ‘will there be enough managed forests to provide the resources needed to create this biofuel to meet the demands?’ It may not, since deforestation, managed or not, is not quite encouraged and so, biofuel that relies on forest residuals may just be an intermediately solution and therefore, the world still needs a more permanent resolution. But like I said, it is a good start. You can learn more about NARA and its biofuel over at the organization’s official website.