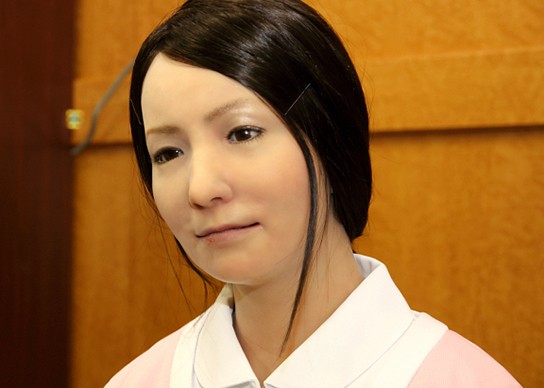 (photo source: plasticpals.com)
i haven’t written on Android development since i have just started (this blog-zine) about a couple of months ago. so this is the first. when i said Android, it is really the Android, Android not some operating system from Google.

showcased here is Android-F (no name as yet for her, or should i say ‘it’), developed by Kokoro Co. Ltd and ATR. facial expressions and head movements are tracked and replicated by the android via computers & peripherals plus a mess of cabling. i supposed ‘F’ meant to say it’s a female version?
[ad#Google Adsense-text-468×60]

the android is placed as an observer in hospitals to gauge patient’s reactions to be watch over by anything other than human beings. at a glance, Android-F does resembles one of us, until it starts to move and speak. creepy… lucky for us – or not, she (or it?) will for remain seated for now, so there’s no worry of Android-F popping out of nowhere and ask ‘how can i help you?’ – which might just leaves us with goosebumps all over.

it’s kinda of cool, and creepy at the same time.

last but least a video of the Android-F in action…

via CrunchGear and Plastic Pals.