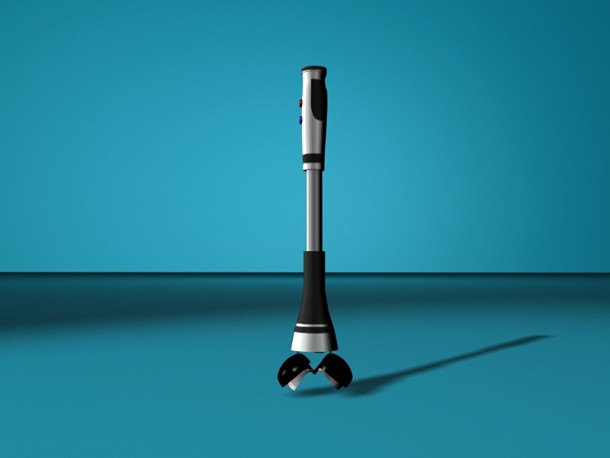 i know you must be thinking this is too good to be true. you half-right to think so cos’ AshPoopie is still in its concept stage but according to the brain behind it, Paulee CleanTec, it will be in the market as early as first quarter of 2012. unlike Jack Black’s hypothetical Vapoorizer that magically vaporize dogs’ poop with a spray, the AshPoopie is a physical wand that will kind of incinerate your dog’s poop. three buttons are all it takes. simply activate the first button to extend the wand’s open scoop over the nasty poop. hit the second button to scoop up the waste, and at the same time a special AshPoopie capsule is release from the cartridge and mixes with the poop at high speed. apparently, this concoction of dog poop and special capsule at high speed will magically turns the poop into harmless, odorless and 100% sterile ash that is safe to dispose. all this narration makes it sounds like the process takes forever but according to Paulee CleanTec, it takes less than a minute to transform your dog’s poop into a pile of ash. well, what can i say? it must be a dream come true for all dog owners, doesn’t it? as mention, it is expected to be available in first quarter of 2012 so, pricing is yet be known. hit past the jump for a pretty self-explanatory video clip.
[ad#Google Adsense-text-468×60]