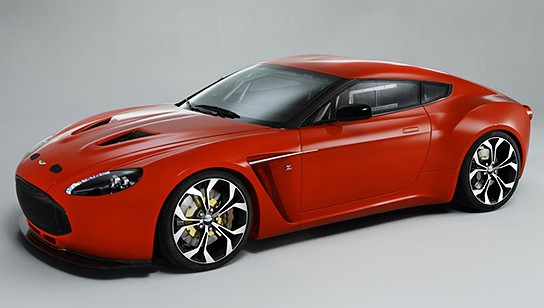 Aston Martin marks the 50th year anniversary of the iconic DB4GT Zagato with the V12 Zagato that premiered at the Villa D’Este Concours last Saturday. the V12 Zagato is slated to appear as an endurance race car at the Nürburgring 24 hours race happening on the 25/26 June, following the tradition of recent new Aston Martins. this collaboration sought to create a modern descendant of classics such as the DB4GT Zagato, V8 Vantage Zagato and DB7 Zagato.
[ad#Google Adsense-text-468×60]

the V12 Zagato is cladded in a all new handcrafted aluminum body in which every aluminum panel was formed using an English wheels and traditionally crafted body bucks. the V12 Zagato is powered by a 48-valves 6.0-liter V12 engine mated to a six-speed automated manual gearbox with auto shift manual/select shift. the V12 power plant develops 510 bhp (380 kW), and 570 Nm (420 lb-ft) of torque and ride comfort is taken care by all round independent double wishbone with fully adjustable Multimactic DSSV dampers while the braking department is handled by 6-pistons calipers and 4-piston calipers, for the front and rear, respectively.

the premiere at the Villa D’Este also served to gauge customer interest in the V12 Zagato which will lead to a strictly limited of road going versions. i am very sure the V12 Zagato will not be lacking of interest in it, especially when its debut coincides with RM Auctions’ Villa d’Este Auction.