Believe it or not, what you are looking at is a wireless router from Taiwanese computer maker, ASUS, called Blue Cave. Wireless router without antennas is not new, but one that isn’t rectangular and black is kind of refreshing, and so is one with a gaping hole right smack in the middle. At a glance, one may mistook as a model of a radical architecture, or an air purifier – thanks to the holes-ridden facade around the back. Of course, it isn’t because we already told you so. This AC2600 dual-band wireless router is designed for the grunt that comes with growing demand for wireless connectivity in a household and that’s where the bold design comes in. 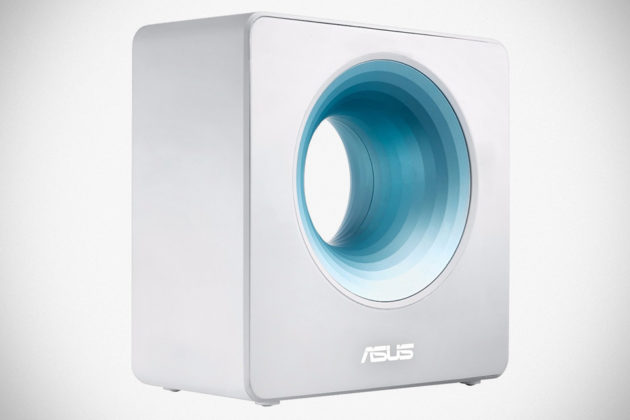 There are antennas but they are located on the roof, while the router’s Intel-powered motherboard gets its own cosy space far away from the signal projecting bits, at the bottom of the device. The hole, according to our source, is a useful void that offers a good clearance between the two. So what can you do with the Blue Cave? ASUS said 4K video streaming and file sharing should go without hitch, or in this case, lag, with this so very handsome router. On top of that, you’d be getting support for IFTTT and Alexa, out-of-the-box, so you can get your home automation, or whatever is it that you do that relies on a wireless router, going without a whole of hassle.

And then there is this thing call AiProtection, a “free-for-life” security solution offered through Trend Micro that will alert you (if you are the administrator) of potential hack via a smartphone app. The smartphone app also lets you manage the router like monitor the network usage, set usage time limits, and even control what apps can have the pleasure of accessing the Internet. In addition, the app will also notify you when a new device is added, so you will always be in the know. Wait. Why does this sounds a little too office-like? Perhaps, that’s the way it should be in order to keep your wireless network secured. Perhaps.

It is not known when the ASUS Blue Cave Wireless Router will be available, but when it does become available, expect it to run you back at around $180.