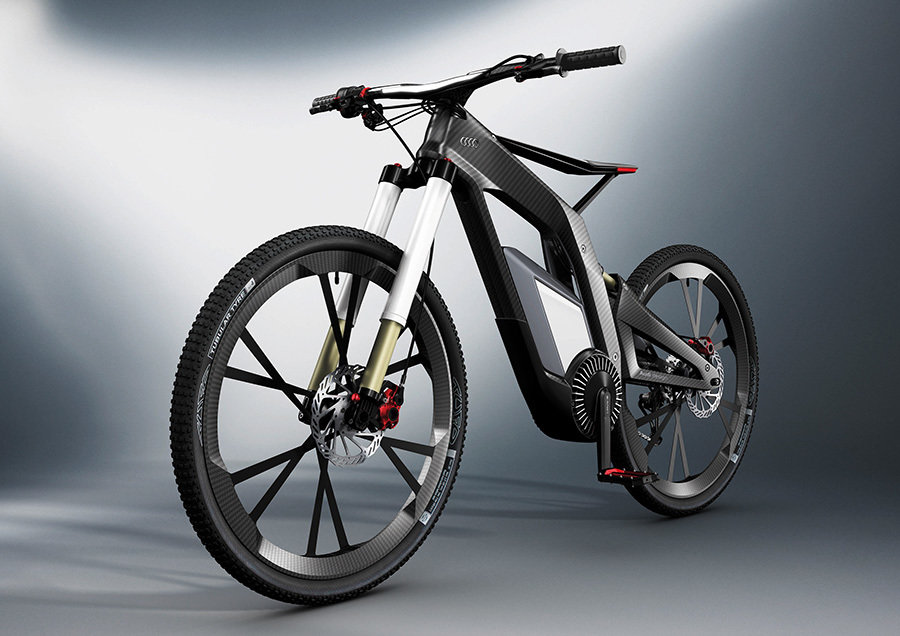 we are no stranger to ebike but still, we are fascinated new examples as they are being announced. especially, so if the bike in question look no other like today’s bicycles (ebike or not) and can perform stunts. well, at least that’s what Audi is saying about its e-bike Wörthersee Prototype. its 1.6 kg (3.53 lbs) carbon fiber frame house a lithium-ion battery pack that provides its 2.4 kW electric motor with juice. it has a maximum 250 Nm of torque spinning down its rear wheel and has a top speed of 80 km/h (50 mph) with pedal-assist (‘Pedelec‘ mode) or 50 km/h (31 mph) if you prefer the bike to do all the legwork for you (the ‘eGrip‘ program). the 530 Wh battery offers a range of between 50 and 70 km (31 and 44 miles). the rider has full control of the output from the electric motor via a twistgrip (like your regular motorbike) and can also configure the power output with the onboard computer. oh, and the Wörthersee stands out as the ebike that can pop wheelie where user can choose to let the bike electronically control the balance while on one wheel or go on without the aid of the electronic wizardry. some of the features of this prototype includes hydraulically actuated nine-speed gear shift and disc brakes, on-the-fly continuously adjustment of seat height via bike’s handlebar control, inverted front fork with 130mm of travel, and integrated LEDs on handlebar and seat. last but least, it is a smartphone-friendly ebike. unfortunately, it is clear that this is a show-bike, which we are unlikely to see in your local bike stores or even Audi showrooms anytime soon but it is nevertheless a sight to behold and something for geeks to dream about. pedal past the jump for a few more larger views.