you know what they say about ‘desperate times call for desperate measures’? well, the smart chopsticks is somewhat the ‘desperate measures’ and the ‘desperate times’ here would be the spade of unsafe food found around China in recent years. smart chopsticks, officially known as kuai sou (literally translates to chopsticks find or search) is the brainchild of China search engine giant Baidu and has a rather ironic beginning. it started out as an April’s Fool joke which the company has no intention of pursuing, but it generated quite a heck lot of excitement which prompted the Chinese company to embark on this ‘mission impossible’. anyway, that was the backstory. 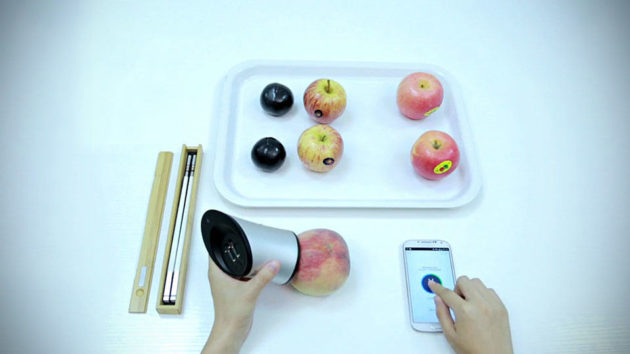 fast forward to today, the company has unveiled a working prototype and even has a video showing it in action in a lab-like setup. however, what really goes under the skin is unknown. what we do know is that each pair of chopsticks has an indicator that will flashes as the chopsticks’ build-in sensor picks up the reading to rate the quality of the oil in the food and logs the temperature. the results are then displayed on a companion app, indicating the quality on a scale of five and its temperature. apart from those two parameters, the chopsticks can also determine the PH level (by indicative strength, not value) and the temperature of the water. it comes with a chopsticks stand which, interestingly, can also be use to determine the origin and type of fruits, plus its associated calories.

if all these sounds a little farfetched to you, you are not alone. i mean, to enable such a slender piece of hardware or in this case, cutlery, to be able to read a myriad of parameters will take some serious electronics miniaturization (which obviously Baidu appeared to have done). those may not be an impossibilities, but to determine where a fruit originated from sure sounds like magic to us. as we were viewing the demo video, we kind of watch in disbelieve and time and time again, we double checked our calendar that today isn’t April 1st. anyway, according to a Sina news report, the chopsticks’ indicator LED will also flashes, presumably in different colors, to indicate if the result is good or bad. though we have to clarify that we did not see that happening on the demo video.

it is also reported that Baidu’s CEO, Robin Li said that the chopsticks are production ready and this version, which he referred to as version 1.0, can even detect if the oil was reclaimed sewage oil. the latter was a huge concerned in China when vendors were caught dredging up leftovers from restaurants and reusing as ‘new’ oil for food which you will be consuming. at this point, Kuai Sou sure sounds like a life-saver for Chinese consumers, but whether it is really practical remains to be seen.

our concern is, people may end up spending more time picking on the food than eating, or even if it does work as intended, it might make eating a rather slow affair cos’ everything time you want to eat, you may feel compelled to check on the meals. in long run, it could even turn a person into an absolute paranoia or food-phobic (as if it isn’t already is in China). with that in mind, we are probably better off not knowing cos’ as the saying goes, ignorance is a bliss. it remains unclear if Kuai Sou will ever see commercial production. if it were to be made, would you get yourself a pair?