it seems like it was just yesterday when Stanmore was announced and Marshall is back with the Woburn Speaker System. announced at the IFA 2014, the Woburn bears similar design language as the firm’s previous speakers, which is (in our humble opinion) loosely based on the company’s iconic guitar amp’ aesthetics. a two-way speaker system, the Woburn packs a pair of one-inch Ferrofluid-cooled dome tweeter and two 5 1/4-inch woofers – plumped to an digital Class D amplifier that promised to deliver 90W of accurate audio response throughout the frequency range. the Woburn also touts a variety of connectivity options, in fact a little more than what you find on speaker of this class and size, including Bluetooth 4.0 with support for EDR and aptX, optical input, RCA connectors, as well as a 3.5mm audio line-in. it is a shame that USB port isn’t in the order, else it would probably be the most ‘endowed’ speaker to date. 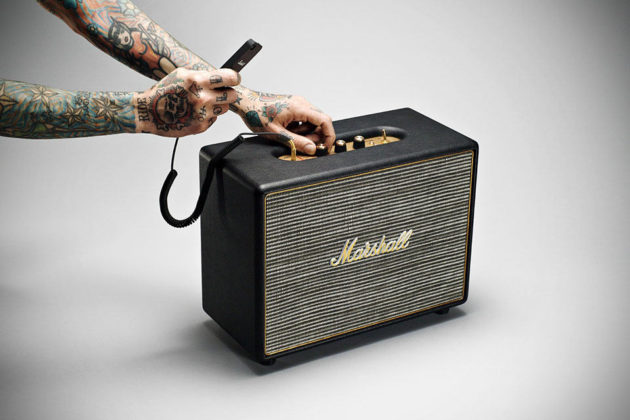 aesthetically, it mimics Marshall signature guitar amp, complete with durable vinyl wrapping the speaker, gold piping, vintage-look front fret, gold-colored metal details and finally, topping off with Marshall’s iconic script logo. on the top side is where you will find the analog treble, bass and volume knobs for customizing the sound to your liking, along with helpful LED indicators to remind you of which connectivity is/are active. when it comes to speakers, there is hardly any green credential to talk about, but not in the case of the Woburn; the system offers two standby modes: power saver and standard, thus minimizing the speaker’s environmental impact when it is not actively in use. granted, that isn’t a huge leap, but it is a start and who knows? in long run and with (hopefully) countless people using it, it might make a difference.

as with Marshall’s previous offering, each Woburn speaker system will comes with a 3.5mm coiled double ended cable that pays homage to the classic telephone guitar cord guitar cable. available in black and cream, the Marshall Woburn Speaker System will be available in late autumn 2014 for $550. however, you can also secure yourself a set by pre-ordering it from Marshall Headphones website starting today. 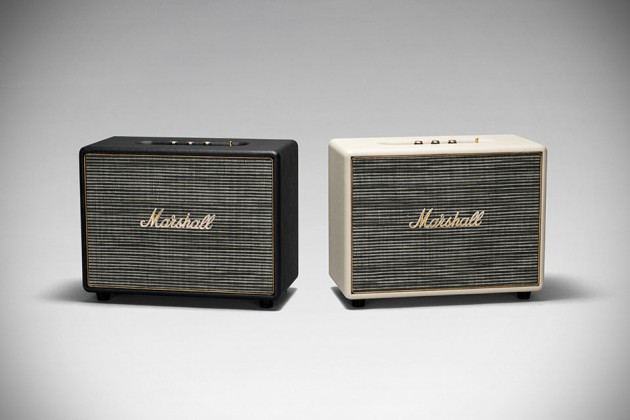