take your obssession with things that transforms, including laptop-to-tablet and vice versa, to transforming robot toys, a step further with these Bandai Sushi Transformers Toys aka Gyakusaisei Motomodoru Sushimodoru. while we are not exactly sure if that’s in fact their official English product name, we can be sure that this is really ‘transformable’, albeit not in the way as you would have imagined, but more like a disassembling and assembling process. so for now, you will just have to forget what you know about Transformers and go with breaking apart the plastic sushis and piecing them into their original form and by ‘original form’ we meant to say, the form before they got turn into sushis, such as a tuna, ikura (aka salmon eggs), squid, kappa (aka cucumber – no relation to any fraternity, though).

surely not as exciting as a prime mover or some GM trucks, and that’s probably why it won’t be on the shelves of stores as mainstream toys, instead, it will be available from Bandai’s Gachapon machines aka the gumball-like machines, where in place of gumballs, dispenses capsule containing random tiny toy of interest (or not) in return for 200 Yen (or about US$2) of your money. there are altogether five models available to collect and they will be hitting those random capsule toy dispensers in January 22, 2014. btw, since it is ‘random’, your endeavor to amass all five could have you ending up with loads of the same toy. just thought you should know, in case you aren’t familiar with this Gachapon thing. 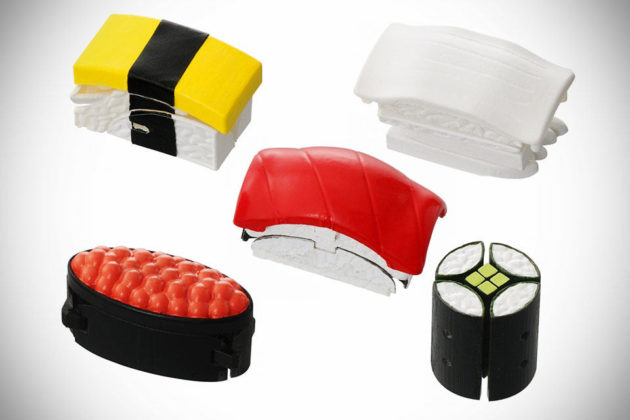