you may not eat the guts of an animal raw, or sleep inside a carcass of a camel (eww…) to survive like Bear Grylls suggested, but you sure can enjoy soaring through sky with the Bear Grylls Paramotor Adventurer Package. lets face it. most of us, even the most extreme of the adrenalin junkies won’t go the extreme as Grylls, so dropping £10,688 (about US$17,490) to enjoy the bright blue sky sounds like a lesser of the extremes. announced by Parajet International, the same folks that gave you the paraglider-equipped flying car, the Bear Grylls Paramotor Adventurer Package is the latest in “one-man personal powered flight”, offering up to 3 hours of flight time, plus all the benefits that paramotor has to offer like ridiculously short take off and landing capability, easy maneuverability, stable and dynamic flight and the lack of pilot license to operate. 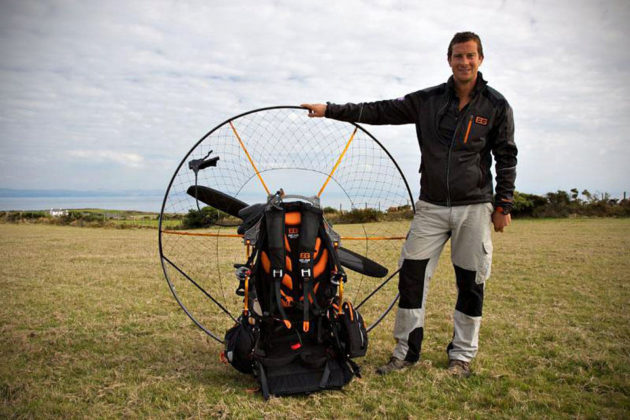 it is not an aircraft, per se, (though it could very well considered as a form of personal air transport) so it can takeoff and land virtually anywhere, be it the beach, open fields, grassy strips, or anywhere of your choosing. well, that’s of course, only if your country of residence allows it. but you get the point. the Bear Grylls Paramotor is designed to be easily taken apart for storage in large case for transportation or simply throw it in the trunk of your car. the package includes a Bear Grylls Paramotor with bespoke harness, wing and helmet, a chassis bag with first aid kit and water bottle poncho, Bear Grylls ultimate survival knife, propeller covers, travel luggage system (including the travel bag), a spar case and cage bag, and finally, a training stint at one of the Bear Grylls Accredited Parajet Flight Academies that last about ten days or so. sleeping inside a dead animal is probably not included. so you are safe from those grotesque stuff.