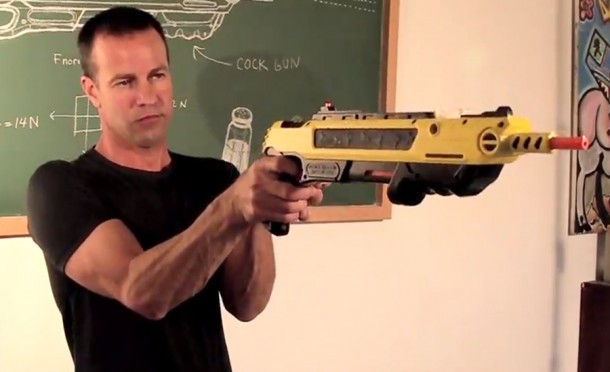 summer time is the time for outdoor activities such as backyard BBQ and picnics but it also a time where pesky insects such as houseflies come gatecrashing into our party. without doubt these flying menaces are not only irritating but also bring about germs that could cause diseases such as typhoid fever, dysentery et cetera. that said, it is wise to eliminate them before they do harm to us and our love ones. traditionally, we use fly traps that include adhesives, electric shock or simply go around swapping them one by one with a fly swap, which kind of makes us look more like some bored retirees, not to mention leaving an aftermath of the pests’ splatter that are often a chore to clean. with the Bug-A-Salt, it offers us the 21st century solution to this pesky problem in form a fly shotgun.

designed like a pump action shotgun, the Bug-A-Salt uses regular granulated table salt as its ammo and has an effective range of 3 to 5 feet. each shot sends a pinch of salt towards the targeted fly, knocking it down in one piece. hence, the bug remain whole which makes sweeping up the massacre scene much easier. no scattered legs, wings or whatever to worry about. this is the most interesting insect killing contraption we have seen so far, so naturally we are pretty dope about it. plus, there’s nothing like combining a man’s love for firearms with a purposeful fly-elimination routine, which is nothing less than awesome. definitely a whole lot less sinful then hunting down deers. you can get your very own Bug-A-Salt for just $30 a pop via its funding page over at INDIE GOGO. check out a video of the Bug-A-Salt in action after the break.