how much of an Apple fan are you? really, really huge? and still have loads of money stashed somewhere after sweeping all of Apple’s newest products? well, then here’s something you really ought to own: the original Apple 1977-1998 logos and not just any logos we are talking about here. they are pre-modern day Apple’s rainbow-themed logos that used to front the company’s Cupertino HQ between 1977 and 1998. now for the awesome news for THE seriously hardcore Apple fans: you will have a shot at owning them when they are put under the hammer on June 4 by Bonhams. the auction lot (Lot 187) consists of two logos, one measuring 46 x 49 x 1 1/2 inches and a smaller one that measures 33 1/2 x 36 x 6 inches, each with its own stem piece. 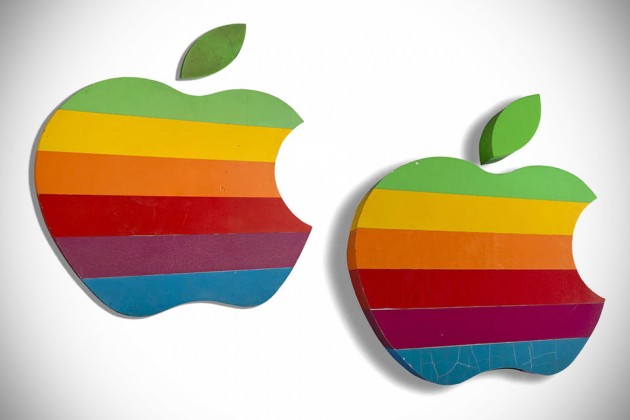 according the auction lot description, the signs were removed from the company HQ in 1997 and presented to “a longtime Apple employee.” though it did not explains how it ended up on the block. the larger of the two is made of stiff foam with six vinyl applied colors, while the smaller sign is of fiberglass with metal backing, vinyl applied colors. both signs do suffers from the inevitable wear and tear earned through the years. auction house Bonhams expects these iconic logos to fetch between $10,000 and $15,000 (£5,900 and £8,900). so where do you intend to put them?