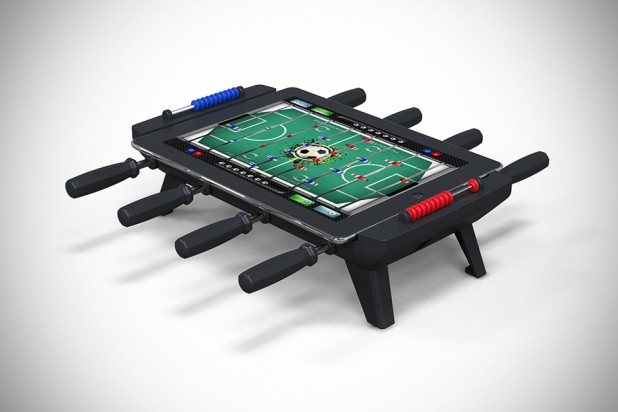 a pinball gamer controller for iPad seems like a no-brainer but a foosball table for iPad? really? is it even feasible? apparently it is, as proven by New Potato Technologies’s Classic Match Foosball Table for iPad. you heard that right, miniature foosball table contraption designed for the large iPad and though small, it is not lacking in features. the ‘table’ features eight functional two-axis control bars with elastomer handles, scoring markers on each end, a rugged construction realistic table with foldable legs for ease of transportation and storage, ‘foos’ buttons on both sides to launch ball into play and a battery-less design and a dock for charging and syncing your iPad without removing it from the ‘table’. the ‘table’ supports up to four players but we are wary how you could cram four people around this cute foosball table. though we are mindful that foosball can be quite an aggressive game and cramming four dude around it doesn’t help at all. so it is probably best to stick with two. it all sounds fun to us except that being a digital game, the playing area seems a little too ‘flat out’ and speaking of which, we think we are so needing holographic technology on iPad right now. anyway, the Classic Match Foosball Table for iPad is available now for $99.99 and as for the app, it will be free. makes sense, since your already put down a good 100 bucks on it.