Think Clue Game and now think Star Wars. Well, the two doesn’t quite appear to be a match, isn’t it? I mean, come’on, people die all the time in Star Wars and if it is set in the Death Star like this game does, you are going to have shit load of suspects, though the finger will almost likely point to Darth Vader. Anyways, while we think it is not quite a match, Hasbro didn’t think so and has in fact turn out the Clue Game: Star Wars Edition. But unlike your regular Clue Game, there’s a plot twist here: there’s no death involved and therefore, there’s no murder mystery to solve. 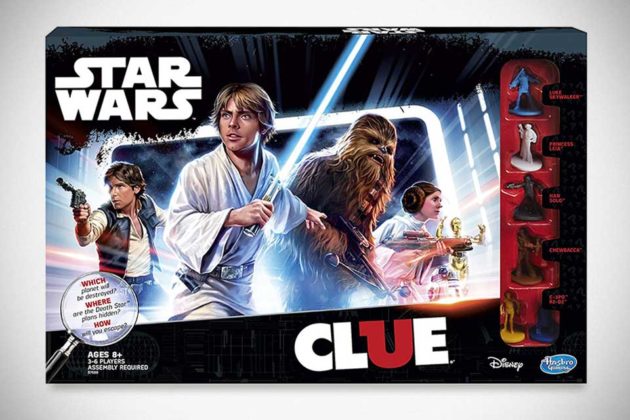 Instead, 3-6 players take on the role as Luke, Leia, Han, Chewie, R2-D2, and C-3PO, and get thrown into the Death Star where they will have summoned all their wits to figure out which planet the Sith Lord plans to destroy next. Also, they will need to find the Death Star plans because that’s the one crucial thing the rebel needs to destroy the damn Moon-size, planet-obliterating space station in A New Hope. And oh, the game also requires the heroes and heroine to determine the correct escape vehicle so they can zip away to safety once all objectives have been achieved.

I don’t know about you, but as a Star Wars, I think this sounds like a lot of fun and the fact that the game plays out not on a conventional board, but on a 3D, 5-piece game board that resembles a section of the Death Star makes it all the more awesome and that’s not to mention it comes with 6 Star Wars character pawns. The latter should be good enough reasons for any Star Wars fans to want to own one. The Clue Game: Star Wars Edition goes for $19.99 on Amazon.