Forza fans take note. Microsoft and Forza is celebrating Xbox 15th anniversary with a couple of goodies for you. For starter, all players will receive a 2017 Ford F-150 Raptor draped in a custom livery celebrating Xbox’s 15 years – that’s the virtual truck you see above. Pretty dope, right? And why wouldn’t it be? A free digital vehicle is always welcome, though we must say the livery leaves much to desire. I mean, it is okay looking, but personally, I am not a fan of the green/black design. But hey, it is free and so, what’s there to complain about? 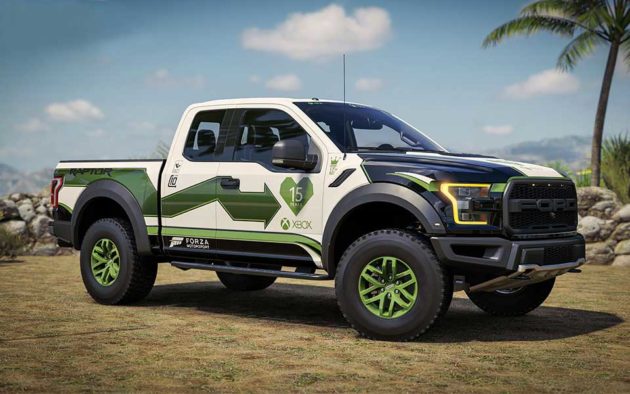 The good news does not stop there if you are a Forza Horizon 3 VIP because as a VIP, you will get a second 2017 Ford F-150 Raptor (a second one!) with a different Xbox 15th anniversary livery which, in my humble opinion, looks a lot nicer. In addition to the free truck with the custom livery, there are two in-game Rivals events created to mark the occasion: one in Forza Motorsport 5 and the other, can be found in Forza Horizon 3 with the latter getting a special Bucket List Challenge which you will have to find by hitting up the Pink Lakes Bucket List point in the game, under the featured event “Celebrate #15 Years of Xbox.”

Both events will star the Ford F-150, btw. Not bad for an anniversary celebration, but of course, more freebies would certainly push this up the scale to beyond awesome.