Most mainstream smartwatch is not as ‘high-tech’ as you have imagined. One thing for sure, they are not what sci-fi movies had shown us, particularly in the communication and imaging department. When mention high-tech wrist worn device of such nature, we expect something like Dick Tracy’s watch which allows you to make two-way communication and not just to talk to Google Assistant or Siri, and we also expect it to be able to take stills and videos, plus possibly, video calls. Obviously, you won’t find those in today’s smartwatches, but not hope is lost if you use an Apple Watch, because there’s CMRA, an Apple Watch band that comes with not one, but two built-in HD cameras: an 8MP outward-facing shooter for capturing whatever that fancy you and a 2MP self-facing camera for video calls and of course, the all-important selfie.

The image is displayed, real-time, on your Apple Watch display, thus fulfilling Hollywood’s prophecy of such high-tech gadgets, or at least that’s what the video promised. CMRA comes equipped with its own battery that good for hundreds of stills, or 30 minute videoing in between charges and there’s LED indicators to let you and everyone else know that CMRA is in use, so obviously, this is not quite the thing you want on your spy gear wish list. But I guess it is still discreet enough. However, I am sure its creator, Glide, did not intend this to be a creepy gadget. According to the product website, CMRA comes in-built with several features that promised to deliver “sharp photos” and “smooth videos” through tilt balancing, lens correction, noise reduction, as well as pixel optimization. Though how well it really works out in the real world remains to be seen. 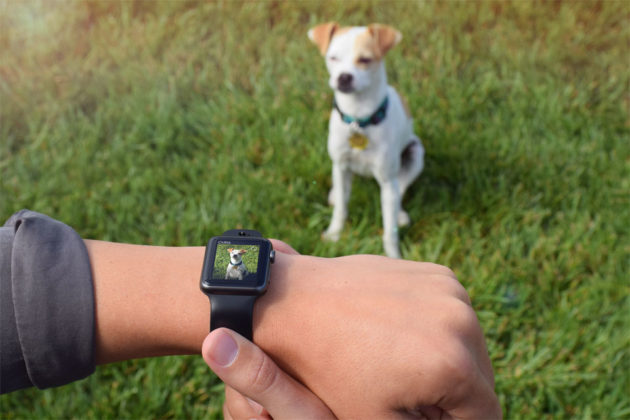 I have to admit, I am drawn to the idea and even go to length to say that CMRA may very well be a reason for me to get an Apple Watch which I have been putting off since the first-generation was introduced. But that also brings me to a question: is it waterproof and if yes, how resistance is it to water? It will be a shame if it wasn’t cos, after all, the second-generation Apple Watch does allow you to swim with it, does it not? Anyways, CMRA is not just an Apple Watch band; it is an imaging device and hence, it does not come cheap, at least not wrist band kind of cheap.

That said, if you want one, you are looking at a $149 investment but that’s the discounted launch price available only for a limited time. But for how long, it is unclear. Anywho, once the “discounted lunch price” time lapsed, it will continue to open for pre-order at $199. Glide said the full retail price is $249, so you are actually getting quite a bit of discount there if you commit now. As a boon for those who pre-order, you will also be getting a dual charging dock that seamlessly charges both your Apple Watch and CMRA simultaneously, as well as a battery pack that offers two full charges (for CMRA, of course). Keep going for the product promo video.