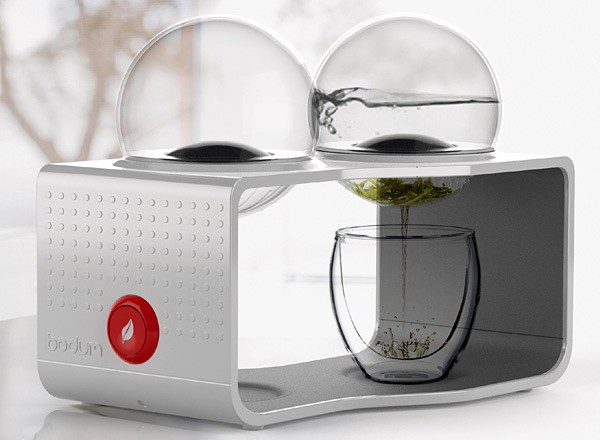 some like coffee and some can’t live without tea. instead of having two machines serving up two different beverages, designer Sunny Ting Wai Wong has a better idea. he conceived a concept Bodum Coffee & Tea Maker that not only looks gorgeous but also centralizes the brewing of two beverages into one single piece of kitchen gadget. don’t ask me what goes into the seemingly bare machine that makes those magic drinks cos’ it is, after all, a concept and as far as Sunny’s concept is concerned, this machine lets you marvel at how your coffee or tea or both brews within the borosilicate glass sphere. yes, it has two of those glass spheres that allow for simultaneously brewing, which means your pal and yourself can each enjoy their own beverage that suit each’s taste bud. located at the bottom of the reservoir is a removable filter that makes sure that nothing gets spilled and the best part? you can choose the amount you wanted to brew, and hence there will be no wastage of caffeinated juice that a single person can’t finish. awesome concept. you know why? cos’ i drink both beverages – not at the same time, though. way to go Sunny. hit the jump and check out a few more images detailing the function and design of this machine.
[ad#Google Adsense-text-468×60]

via psfk via simbiosisgroup news

NOW READ  Pod Or Ground Coffee? Well, The nutribullet Brew Choice Pod and Carafe Does Both!