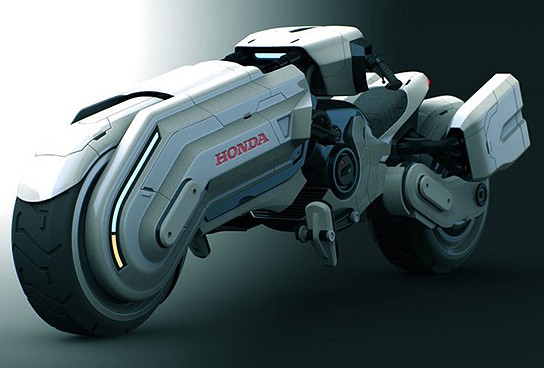 from the man who dreamt up of the Pininfarina Coupe Concept, comes yet another concept but this time in a form of an electric motorcycle, appropriately dubbed the Honda Chopper. apparently, Peter drew his inspiration from Star Wars which is not hard for us to see the link. the chopper features clean lines that was a trademark of many sci-fi depictions in the 70s and 80s. personally, i thought it might have took some inspiration from cult Japanese manga such as Akira.
[ad#Google Adsense-text-468×60]

the concept electric bike features a long front suspension, feet forward seating position (think Harley or Vespa) and a fairly large footprint. interestingly, the bike is designed to be powered by two electric motors, one on each of its two wheel hubs. logically speaking, this will lower the center of gravity, thus should be beneficial to its handling department. i am not too sure about the effect of the extra long front on a bike’s handling though. plus, having two separate motors running in sync would also means that a sophisticated synchronizing system would be essential which i supposed will be catered for.

nevertheless, it is a beautiful bike and though i am not a rider, i would certainly hope Honda would take this up and make this a real world product. more images of this gorgeous bike after break.