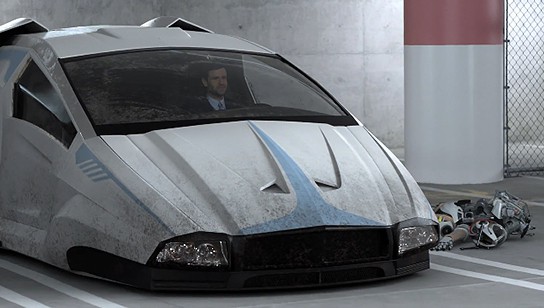 (credit: screenshot from 2001 Dodge Charger The Future of Driving video)

with a statement such as “robots can take our food, our clothes and our homes but they will never take our cars” and finished with “…the leader of the human resistance” (no relation to Transformers, though), the Dodge Charger commercial does suggest that technological advancement isn’t everything (or to extend, not a good thing). Dodge is of course, referring to controlling of their new Dodge Charger. true-blue car fanatics will certainly agree with this statement. in fact, some will even think automatic transmission is for the sissies but then again, we do need innovations to make the road a safer place to travel on, don’t we?
[ad#Google Adsense-text-468×60]

with all the power and speed, we are even more in need for technological developments, hence an anti-technology sentiment doesn’t seem like a fair statement. of course, there are far more implication such as pollution and depleting resources to take into consideration. again, which are issues that blatantly relies on technological advancements to reduce the impact that vehicles (now and future) have on our planet. perhaps the depiction of the cars of the future in Minority Report as referenced to by Plastic Pal is little too extreme but i personally think that a scenario as featured in the movie I, Robot would be a more likely and just situation for the future.

real world implication aside, the commercial is definitely worth a viewing and in marketing/advertising stand point, Dodge has successfully put its message across. it just made me want a Dodge Charger so bad but wait… I am not living in North America! what a bummer, isn’t it?