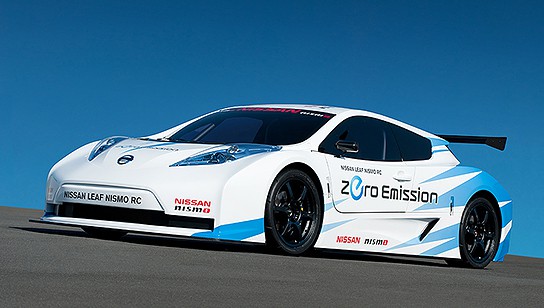 we are all excited about Nissan’s race-prepped EV based on the LEAF. if you haven’t know, it is called the Nissan LEAF NISMO RC. we first featured it last month, and more recently, updated it with more photos. today we are please to feature the first video of the Nissan LEAF NISMO RC hot from Nissan. check out this lengthy video (about 8 minutes plus) after the break.
[ad#Google Adsense-text-468×60]

just some heads up before you watch the video. it is basically an intro video of this prototype EV race car with major part of the video featuring interviews with Manaki Iwamoto of the Motorsports Planning Department, Yataka Suzuki Racing Engineering Department of NISMO and the appointed test driver Tsugio Matsuda. the rest of the video are injected with a few glimpse of the handsome black LEAF NISMO RC in action. nevertheless, it is a pretty informative video. at least now we know how it sounds and look when moving at speed. the video was recorded at Sodegaura Forest Raceway on the May 13 and it was the second time the LEAF NISMO RC was tested on the track.

[update – July 4, 2011] shortly after Nissan release the first official video of its Nissan LEAF NISMO RC, another video surfaced and this time it is Nissan’s executive vice president Carlos Tavares that took the helm. that’s right, you heard it right, Mr. Tavares took the LEAF NISMO RC for a spin around the Sarthe Circuit in Le Mans and he has an on-board that captured the electrifying action. check out the 20-plus minutes of sweet electric whirling video after the break. trust me, if you are fan of racing sports, you won’t want to miss it.
NOW READ  Lexus Unveiled Its Latest All-Electric Concept Vehicle, Called LF-Z Electrified