cable clutter is a modern day’s man woes and if you are always on the move, that woe extends beyond your desktop to your bag. the scenario of pulling out a whole bunch of cables is not uncommon, but with the Cordito, it empowers you with on-the-go cable management where a messy tangle of cables will be a thing of the past. handcrafted from premium leather, the Cordito (think Burrito) features three integrated loops for holding cables (or earphones) and a large pocket with room for up to two plugs (international plug fits too!), and neatly roll up into a compact, easy to carry package which you can toss into your bag without having to worrying about tangle mess – ever. a set of metal button closure keeps thing wrapped until you are ready to use them. 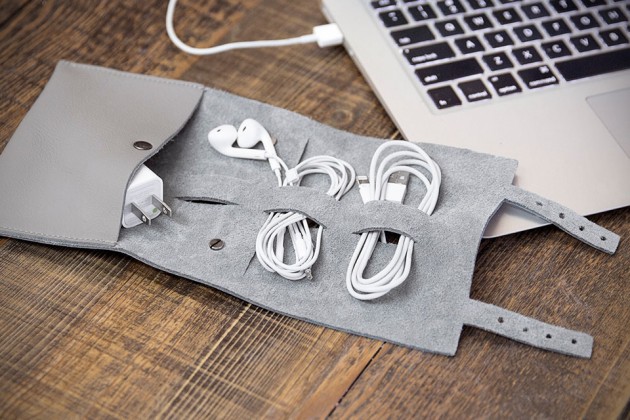 made in the U.S.A., the Cordito is offered in a myriad of colorways, ranging from black to whiskey to funky hues like turquoise and coral. the Cordito presents as an exceedingly simple solution that not only eliminates our cable woes, but also making sure we do it in absolute style. seriously, if we didn’t think so, we wouldn’t be featuring it here now despite the Cordito has been in the market since last year. speaking of which, the Cordito was one of the “tastiest” cord solution offered in a successfully funded Kickstarter campaign that ended sometime in October last year. if you are looking for a single solution, or any other tech lifestyle organizing needs, you can head on down to This Is Ground official website and sniff out other super cool products. as for the Cordito, you grab it off from Touch of Modern from now till April 2 (12PM PDT) for just 24 bucks.