what do you do when the toys you long for never made it to the market? well, we don’t know about you, but Chicago-based humor writer and artist Dan Polydoris of Chicago Toy Collector decided to craft his own action figures instead. he has created a collection of action figures based on some of his favorite Atari games, specifically, Activision games “due to their particularly memorable characters and recognizable box aesthetic.” Dan took a bunch of old G.I. Joes, subjects them to a “toy operation” with some “plastic surgery” (sorry for pun), hacking and fixing, and then giving them the appropriate colors. the result is iconic characters including Short-Order Sam (Pressure Cooker), Officer Kelly (Keystone Kapers), Pitfall Harry (Pitfall!), Roderick Hero (H.E.R.O.), and Frostbite Bailey (Frostbite), each packed into its own unique, retro-style blister packaging that echoes the era’s design influence.

for these custom action figures, Dan sticks closely to the character’s color scheme from the game, with the exception of parts like the boots, gloves, belts and stuff, which kind of makes sense, cos’ you can’t really make out what’s the color of the Short-Order Sam’s belt (does he even have one?) or color of the Officer Kelly’s sneakers from those pixelated graphics, can you? unfortunately, it looks like Dan has made them as a personal stash and will not be selling them. 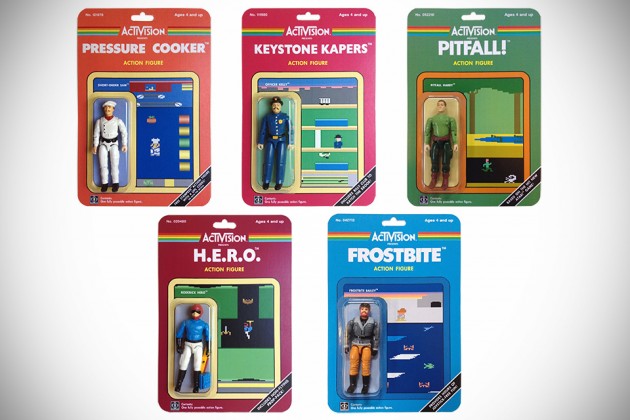