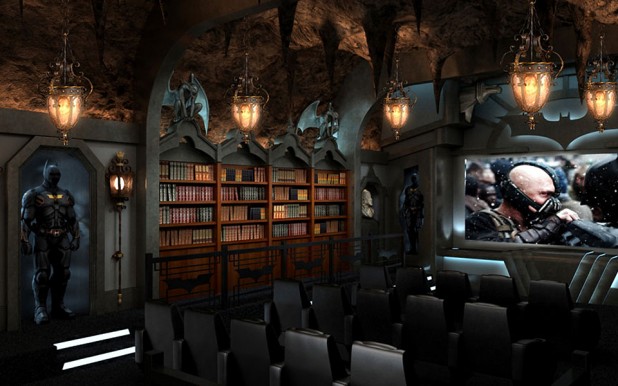 still fantasizing about taking on the role of the cape crusader? the truth is, it can never happen. sad fact, indeed but if you have like $2 million to splurge, you could turn your seizable spare room into a Dark Knight themed home theater. according to the brainchild behind this awesome custom home theater setup, Elite Home Theater Seating, this particular gothic setup “fuse together the cozy elements of Wayne Manor, with the Art Deco styling of Gotham City” – a statement that we can easily see why. so what do expect when you drop two million greens into this? how about a secret chamber for the Dark Knight’s ride, Batmobile aka “Tumbler” facing a faux tunnel exit, concealed by classic-styled bookcases complete with books? of course, that’s not the only goodies. there is also a set of 15 Model B1 seats with armrests for audience, a working fireplace, gothic-style overhead lamps with cavernous ceiling as their background, and topped with almost realistic “Batcomputer” which Batman uses for his vigilante crime fighting purpose. this particular example is being built in a private home located in Greenwich, Connecticut and occupies a 12,000 square foot of space. other Bat-ly treats include a 180-inch film screen, six Batsuits dotting the room, winged gargoyles for the added gothic touch, private cylindrical stainless steel elevator (otherwise known as lift), and a huge backlit bat logo located prominently above the large screen. it’s a custom job, so we would think almost anything is possible as long as you have a big fat account and resides in the U.S. apparently, this particular example is still work in progress with expected completion sometime in November 2012. hit the jump for a few more, tell us you are not impressed.

NOW READ  DC Drops A Bunch Of Superheroes Teasers And Trailers, Including The Flash, Black Adam, The Batman, And More