Another episode, another lucky super fan gets a one-of-the-kind custom built item that befits their super fan status. We are talking about Break’s Super-fan Built series, where previously we have seen awesomeness like the Batman Tumblr stroller and Lord of the Rings cat litter box conceived and constructed by the very talented prop maker Tim Baker. This week’s one is however even more impressive, simply because it is opening week of the year’s most anticipated film, Marvel’s Avengers: Age of Ultron. So what did Tim and team built this time? Well, lets just put it this way: this week’s lucky super fan Natasha Vineyard’s toddler daughter gets to snuggle in the world’s most power high chair ever built: the Hulkbuster from Avengers: Age of Ultron. 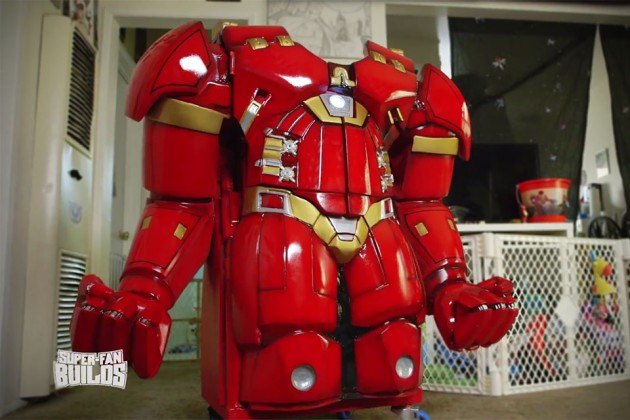 This unique piece is built around an existing high chair that’s reinforced with steel on the inside and like many super-fan built before it, the beautiful exterior was carved out of foam blocks, smoothen out, and finally sealed with epoxy hard coat and painted. However, Tim didn’t quite stick to the movie realistic Hulkbuster as reference, instead he designed it to be a little on the cartoonish side (case in point: it has just three digits instead of the usual five), but is no lacking of ‘real Hulkbuster’ features including a light-up arc reactor, a hulking armored body and a chest that opens up to reveal a dark fabric-clad infant seat inside. Not sure if little Amelia knows it, but she’s one heck of lucky child, you know, to be growing up being fed out of a Hulkbuster. 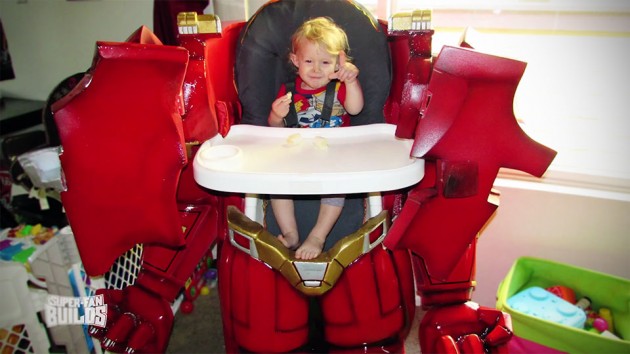