Daiso is most famous as the “100 yen shop” that stocks an astonishing variety of products costing, you guess it, 100 yen. It has stores all over the world, selling anything from household products to fashion to novelty gag items like the Dokkiri Cutter, AKA Cut-Your-Finger Prank Knife you see here. What this cut-your-finger prank knife offers is quite obvious: while looking like a real utility knife, the blade is actually blunt and it has a little semicircular indention that, when you position your finger in it, makes it look like you have cut deep into the finger. 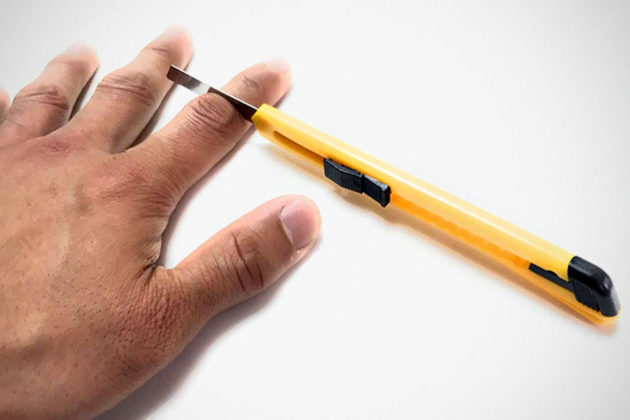 It is super convincing, as you can see in the video below (and also the product image). Convincing, except that it has no fake blood to go with it. Nothing seem out of the ordinary for this harmless prank item until one day when a customer came trotting back to one of the branches in Tokyo’s Chuo Ward, where the customer had bought the Dokkiri Cutter, to return the product. The reason? The supposed prank knife this person bought not only does not have the semicircular indention, but the blade is also sharp. Like, you know, real knife kind of sharp. 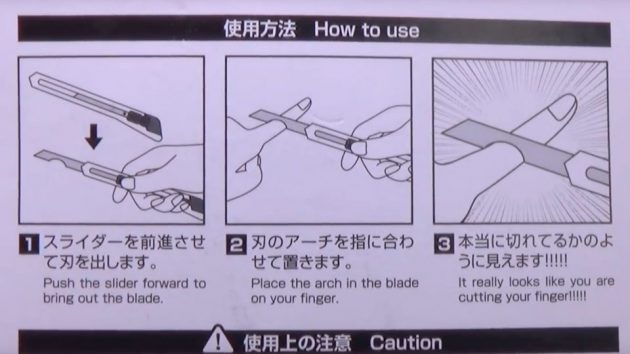 In other words, what this customer gotten is a real knife, packed inside a package that was supposed to be a fake, relatively harmless knife. Imagine the possible consequence of this mixed up: someone is going to lose real fingers and that someone would likely be kids and highly intoxicated grown ups. Though, it can happen to overly naive adults who believe magic is real. Anyways, as it turns out, the case that was brought to light wasn’t an isolated case.

A check on the store’s stock revealed that the reported fake-turn-out-to-be-real knife product is not alone; there are a number of them and God knows how many of those are already out in the hands of customers. It looks like somewhere along the line, someone have mistakenly packaged real knifes as the prank knifes and what’s even more amazing is, no one has raise the flag until now. Anywho, to prevent a nation of Daiso patrons losing their digits, Daiso has decided that it would be wise to cease the sale of Dokkiri Cutters and also recall the Dokkiri Cutters that are already out in the wild. Well, that was one mixed up that could literally spill blood.