looking up to the sky, we suspect that no one needs this book because none of us owns a Death Star, but if you so happen to own one (clever you for keeping it so secretive the whole time), then you probably need the Death Star Owner’s Technical Manual: Imperial DS-1 Orbital Battle Station (Haynes, ISBN 978-08041766143) conceived by car maintenance manual publisher Haynes and of course, Lucas Books. instead of telling you how to build one, this 128-page hardcover book traces the beginning of the deadliest star in the galaxy far, far away and details the spherical spaceship’s onboard systems and controls, along with drool-worthy illustrations, floor plans, cutaways, as well as exploded diagrams – all newly created by artists Chris Reiff and Chris Trevas. btw, Chris and Chris are also the same dudes behind the Millennium Falcon Owner’s Workshop Manual, while the text comes courtesy of Ryder Windham, who is no strange to writing Star Wars books.

the book also covers the history, development and prototyping, the superstructure, energy and propulsion, along with the weapons and defensive systems, hangar bays, security service and technical sectors, and crew facilities. it also contain information of the Death Star II and the all-important planetary shield generator – making it the most complete guide of the Death Star ever. though named ‘technical manual’, you can practically construct a Death Star with this guide. however, don’t just go about building this galaxy badass yet because according to a study by economics students of Lehigh University in Pennsylvania, it will cost $852 quadrillion and requires some 833,315 years just to gather enough steel for this apocalyptic habitat. at that rate, you are better off settling for the Death Star Wall Tiles instead, you know, for practicality sake. else, you can get the Death Star Owner’s Technical Manual for a mere $18.98 and just drool (or fantasize, the choice is yours) over it. 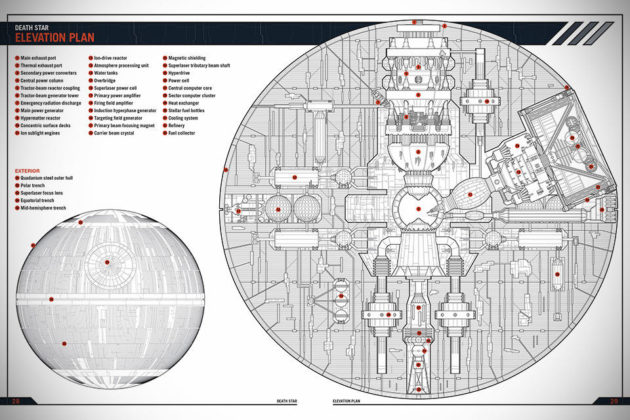 Amazon via The Telegraph