we don’t need to reiterated how building a Death Star is never going to be economically viable – even if all the world economy comes together. so let just say that these Death Star Wall Tiles by Tom Spina Designs will be your best bet in getting the Death Star look you so desires, sans the planet-obliterating superlaser, but the good news is, there won’t any trenches for that nasty prick Luke to do the trench run too. so you are safe on the dark side for now. the concept of creating the various individual tiles to form the “landscape” of the Death Star started with Industrial Light & Magic (ILM) when the shoot calls for closeup of the Death Star and by having them as separate tiles, it allows the filmmaker the flexibility to mix and match them for the effect the set requires. anyway, that’s just the back story.

the Death Star Wall Tiles you see here were born when a client requested for a Star Wars trench run feel in a home theater setup, but now, as a Star Wars-loving consumer with the right amount of money to drop, it can be yours to transform your pad’s wall into a Death Star or Imperial Destroyer-like look. each tile measures 12 by 12 inches with a depth of 3-4 inches and the intentional big and chunky design was molded and cast in tinted resin by Lonnie Hale. the random color variations, which was chosen during installation, gives the 120 tiles a sense of depth when applied to the wall. needless to say, we are all for the look – if not for the consideration that the uneven nooks and cranny could be the potential resident for those inevitable dust, which would make cleaning them a daunting task.

so, yes. the Death Star Wall Tiles by Tom Spina Designs can be yours to own, but exactly how much it will set you back at is yet unknown. one thing for sure, it won’t cost a galactic sum like the real planet of death. hit up Tom Spina Designs website to learn more and if you are both mentally and financially prepared, perhaps even touching based with them about your intention to purchase. 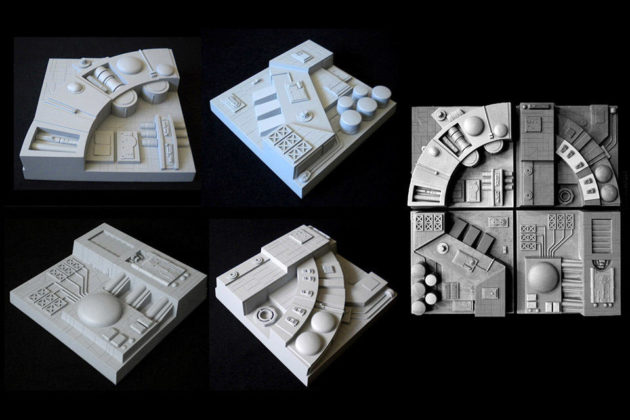