while folks like Amazon and Google are still laying out plans to make drone delivery a reality, Deutsche Post DHL very own delivery drone had successfully made its first autonomous delivery flight to the Island of Juist, located at the Lower Saxon Wadden Sea, delivering emergency medication. the drone, aptly called Parcelcopter 2.0, has secured approval from the relevant authorities and ministries to operate in a restricted flight area and will commence the research runs starting September 26, plying the 12 kilometers (7.5 miles) route from the passenger port of Norddeich to a designated launch/landing pad on the Island of Juist. after which, DHL local courier service will take the parcel for the rest of the way. 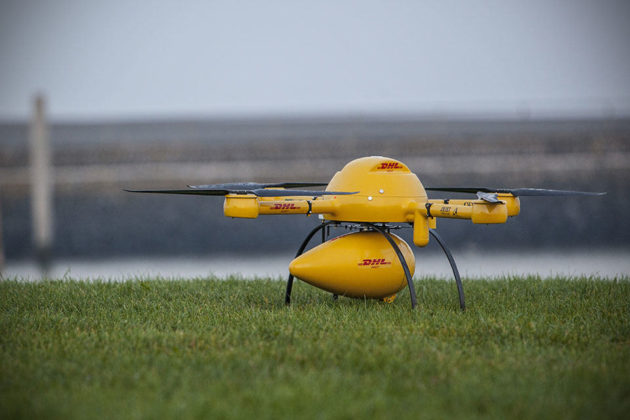 the Parcelcopter research project was launched in December 2013 and the trial runs mark the next phase of the project. the system was developed in partnership with Institute of Flight System Dynamics at RWTH Aachen University and Microdrones GmBh, and since last December, the vehicle has been modified to perform this specific type of mission. aspects such as flight duration, flight range and speed are all optimized to take up the challenge posed by the wind and marine-weather conditions of the North Sea. the flight is completely autonomous, from taking off to landing, but in compliance with the requirements set by the relevant agencies and for safety reasons, the Parcelcopter will be monitored throughout the duration of the flight by a mobile ground station in Norddeich. this will allow ground crew to react immediately in the event of malfunction or emergency. part of the ground station scope also include maintaining constant contact with the air traffic controllers, even though the Parcelcopter only makes a top speed of 18 meters per second (40 mph or 35 knots) and flies at an altitude of just 50 meters (164 feet). 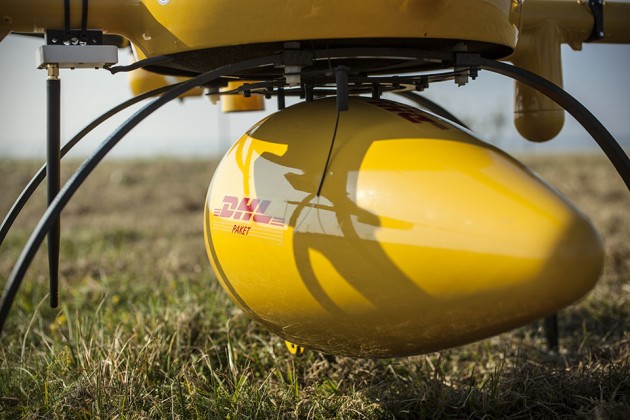 a special air-transport container was also developed for this purpose. the container, as you can see from the image above, is tear-drop shape, presumably taking aerodynamic into consideration, and is extremely lightweight, and is naturally, weatherproof. the craft will primarily used to transport medications from mainland to the Juist at certain times during the week and on weekends, targeting at windows where traditional mode of transportation such as the ferries and flights are not available. so the future with lots of things happening in the sky as often depicted in sci-fi movies and books is at the verge of realization. but are you ready for this future?