whether you are an aspiring movie maker or someone who just wanted a different perspective of your family outing photos, the DJI Phantom 2 Vision Quadcopter will be able to fill in the shoes and thanks to the influx of such camera-rigged quadcopter, the acquisition won’t leave you begging on the street. the DJI Phantom 2 Vision Quadcopter is a follow up to the firm’s original Phantom which was introduced earlier this year and it features a slew of enhancements that addresses the various shortfalls of the Phantom. well, not that the Phantom wasn’t any good, but the Phantom 2 just made it even better, so that you can focus on imaging and not worry about flying.

the Phantom 2 uses built-in WiFi, aided by a WiFi range extender, allowing real time streaming of video and images to your smartphone from over 300 meters away. with the new found WiFi feature, pilot/videographer will be treated to real-time flight telemetry such as speed, altitude, battery life, SD card storage status, plus a radar-like display showing your position relative to the Phantom 2 in flight. it also allows you to remotely manipulate the onboard HD camera with your smartphone (by touch or tilt, the choice is yours) and capture stills, kicks up video recording, or even copy images or videos to your phone and share item instantly on Facebook – all while the quadcopter is holding its position in the air.

controls of this flying camera is via a sleek (and matching) transmitter that uses 5.8GHz control frequency to avoid conflicts with other WiFi and Bluetooth devices, and you will, of course, get the full control as with any full-fledge quadcopter. the onboard HD camera (f/2.8 with 140-degree Field of View) is capable of capturing 14MP stills and records Full HD 1080p videos at 30 fps. a plug-and-use 5200 mAh lithium polymer with built-in battery indicator gives this unmanned aerial vehicle up to 25 minutes flight time in between charges, while the in-built flight stabilization and GPS auto-pilot system allows you to concentrate on framing your shots and less on flying.

all told, this flying imaging rig is one of the few in the market that is truly geared towards amateur and prosumer users, which means you won’t have to drop serious money for one. speaking of which, you can actually snag one for just $1,160. but if you don’t have a kind of dough and don’t mind something a little ‘lesser’, you can still grab the first generation Phantom for a mere $440. see the Phantom 2 Vision in action in the embedded video below. 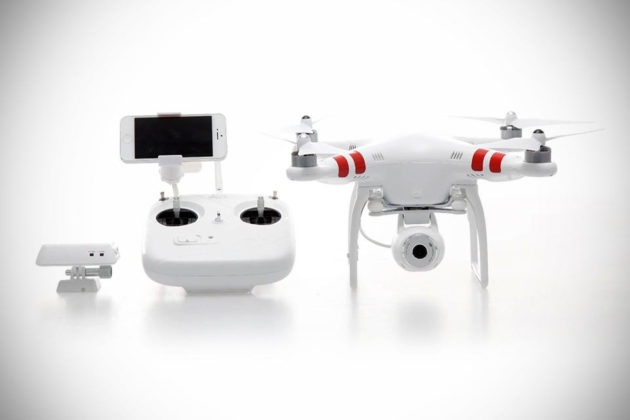