Yes. You heard that right. Apparently, a zoo at the International Gardens Park in the capital of Egypt had a donkey painted with black and white stripes in an attempt to pass it off as zebra. Of course, the accusation was followed a zookeeper who called it a bluff. But you know what they say? A picture is worth a thousand words and the one picture that went viral online pretty much says whoever said it was a lie, was lying through his/her teeth.

The allegation surfaced when one Mahmoud Sarhan visited the zoo when he noticed something weird about the ‘zebra’ when he got up close. Seriously, unless the image was Photoshopped or there was some sinister hybrid cloning operation going on at the zoo, that creature there is as donkey as Eddie Murphy gets in Shrek. Just look at the pointy ears, the obvious trade of a mule, and the mane there was also an dead giveaway (zebra’s one goes all the way to top).

However, none of those telltale signs was more obvious that the donkey was cosplaying as a zebra then the smudging of the alleged painting on the animal’s face. This allegation was serious one and so, it was only natural that zookeeper Mohamed Sultan denied that the zebra was a fake. Well, dear Mohamed, you can say whatever you want, but what saw what we saw, and clearly, we know what saw. Apparently, this isn’t the first.

According to a report, a zoo in Gaza also made their donkeys to cosplay as zebras by painting them with the zebra-exclusive black and white stripes to replace two zebras that had died of starvation. Why would anyone do that you asked? Well, the reason is because, cost. As it turns out, zebras are quite a glutton due to their inability to efficiently digest food like regular animals. Because of this digestive issue, they have eat more to make them feel full, or something to that effect.

On average a zebra of around 600 pounds will need to gobble down 30 pounds of food per day which worked out to be as much as 210 pounds a week. So, as you can imagine that must have cost, especially for zoos trying to stay afloat financially. Though it is not known how much the combination of grain and hay each zebra consumes a day costs. Well, whatever the reasons the zoo had for making the donkey go incognito in a zebra pen, we sure had a good laugh!

And here’s a side-by-side comparison of the two animals: 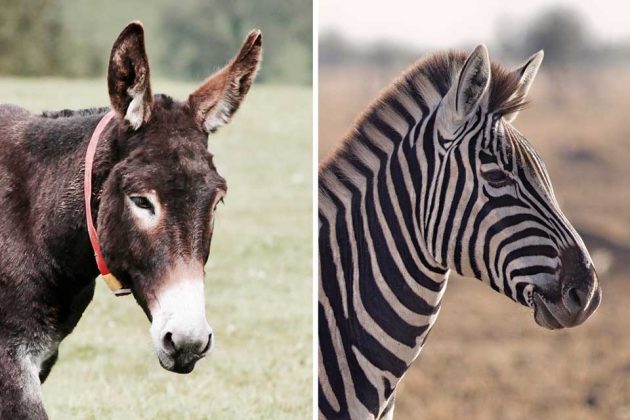 See the difference? Do we even need to say more?

However, we not dismiss the possibility of it being an odd ball zebra (a sad zebra that looked like a donkey and with deformation by the way of a smudged paint job, um, I meant stripes), after all, the nature is somewhat weird. And also, it is plausible that it was the work Photoshop. But like I said, we had a good laugh whether or not this is real or not.

Source: All That Is Interesting.