Can you tell if a person is well-to-do, i.e. rich, by the phone the person is using? Well, apparently you can, according to the economists at the University of Chicago. The college recently published a paper with the National Bureau of Economic Research, entitled Coming Apart? Cultural Distances in the United States over Time, on how consumer behavior and media consumption relates to demographic information.

Part of the study looked into products and brands “most indicative of being high-income” which, under the “Brands,” iPhone swiped an impressive 69.1 percent as the top indicator with iPad following suit at 66.9 percent. From the study, it is clear that the two Apple devices were the two top indicators of your wealth, or so we heard.

One may argue that you can’t judge a book by its cover. Neither can you by his or her phone, but as it turns out, researchers have found that based on their years in their data, “no individual brand is as predictive of being high-income as owning an Apple iPhone in 2016.” You know what? Given the high price Apple laptops command, I am surprised that MacBook wasn’t used as an indicator of the chance of correctly identifying the owner as “high income.”

Speaking of “high income,” it is defined, on the paper, “as being in the top quartile of come for the person’s household type (single, married, with dependents, et cetera.).” Then again, the study may not be entirely accurate, since iPhone has as many older models, which are much more affordable, floating in the market. Moreover, most products could be bought fairly comfortably through financing plans, and in the case of a phone, through carriers’ subsidies.

NOW READ  OnePlus 10 Pro: It Is Actually A Tad Cheaper Than The 9 Pro

But we are talking about chances of identifying if a person is rich or not based on the device that they use which the study shows that 69 percent of iPhone users were indeed well off. In all fairness, I thought the study was merely an affirmation of iPhone, or Apple in general, is a brand/product that closely associated to status symbol.

As a consumer, I have long perceived Apple products, not just iPhone, as something only those a little more well-to-do are willing to part money for. Perhaps, that is the very reason I dropped iPhone in favor for Android (again) since last year after the iPhone X announcement.

In any case, the real take away is how a comparatively insignificant product can become an indicator of status symbol. To think that the indicator used to be owning an automatic dishwasher (in 1992) and buying a new vehicle (in 2004) – both which item you hardly feel the need to change model as compared to say, a smartphone. I guess this only serves to show how pricey iPhones are with respect to the product life cycle (granted that generations of Apple iPhones are still circulating on the market and they are still supported by the company). 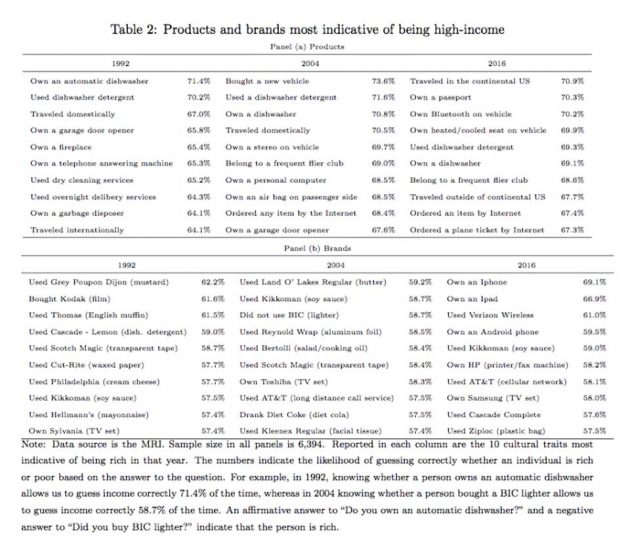