Apart from building yourself one, or winning a scaled replica, odds of you having a chance to take a spin in a Batmobile is next to zero. The prospect seems bleak, but with a little luck, you might just get the opportunity to do so. Ben Affleck has teamed up with Omaze, an online cause marketplace, to offer a shot in having a chance to take a ride in the Batmobile. What you need to do is really simple: donate $10 to have 100 chances to win. 10 bucks is the base, but there are other tier of donation, right up to a cool $50,000 for 500,000 chances to win. 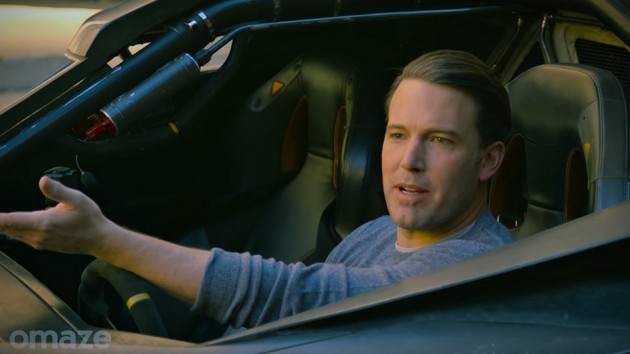 Logically speaking, the more dough you drop, the odds will be higher. Though we have stressed that it is purely luck-based so, you’d be taking chances, but you will also be doing something really meaningful. In addition to riding in Batman V Superman’s iteration of the Batmobile, you will also get to fly with Henry Cavill… in a helicopter. Sorry folks, that’s the best a real human can do: flying in a heli. You will also get to take a photo with Ben Affleck at the NYC premiere of the Batman V Superman: Dawn of Justice, as well as photobomb the cast with Jesse Eisenberg on the red carpet. And oh, flights and hotel are included too. Pretty dope, right?

Your donation will go a long way in helping the Eastern Congo Initiative, SEED Project, and the Durrell Wildlife Conservation Trust. You can learn more about the individual cause on Omaze. Go check it out. But before you go, check out a prank-ish video below where Ben Affleck surprises fans in the said Batmobile.

NOW READ  DC Drops A Bunch Of Superheroes Teasers And Trailers, Including The Flash, Black Adam, The Batman, And More