remember the Life Is Precious Survival Kit, the coolest survival kit that you can’t buy? well, looks like its creator Ford Standard, knows your yearning and decided to introduced a simpler version money can buy (according to the company, they have received overwhelming requests to sell the kit). based on the desirable kit introduced last year, the Fire Survival Kit as it is called, is machined from a solid bar of brass in Queens, New York and holds a bunch of strike anywhere matches and a cotton ball in the cap for tinder. it brass cylindrical container features a roughened bottom that act as the striker for the matches and in case you forget its function, the canister is engraved with “Fire – Light & Warmth – Strike on bottom” as a subtle reminder.

so what happens after you have expended the strike anywhere matches? we don’t know; perhaps you could use this as a handle survival kit containment for things like fishing lines, hooks, sewing kit, cash, or whatever you can fit in there. it is waterproof, btw, so it is perfectly fine to be using as such. however, it does come with a rather hefty sticker. each Fire Survival Kit, which has only one purpose and that is to start a fire, will set you back at $150. yes. that’s one hundred and fifty American dollars – making it one heck of a luxury to be owning. scroll down for a close up shot of the ‘roughened’ surface in case you don’t know how it looks like. 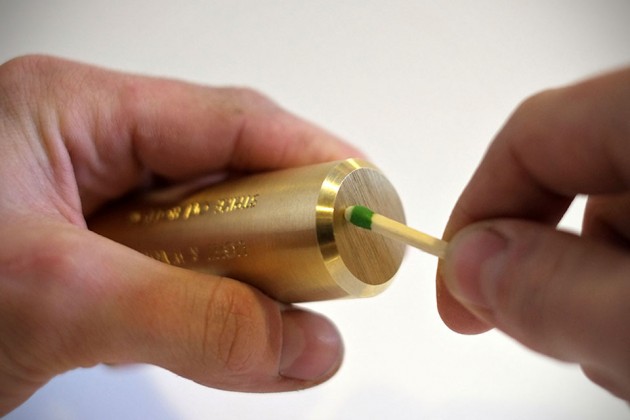