The now-popular configuration of drone, i.e. quad or multi rotor setup, makes them difficult to stowaway. Even the smallest of drones can’t fit into your pocket without breaking a rotor or two. That’s probably not a concern for hobbyists who rather the drone be bigger for visual clarity sake when flying. But if a drone could be make pocket size, it will greatly benefit first responders who can leverage on the size for portability while taking advantage of what a flying robot offers, such as sending it into disaster area for aerial survey. This is what the Foldable Drone, developed by Swiss Federal Institute of Technology’s researchers Stefano Mintchev and Dario Floreano, can do. It is foldable, drawing inspiration from traditional origami to achieve this feat, and unlike some science fiction flick where you see arms of the drone slowly deploys (in a dramatic way), the rotor arms of this miniature robot snap into place in less than a second. 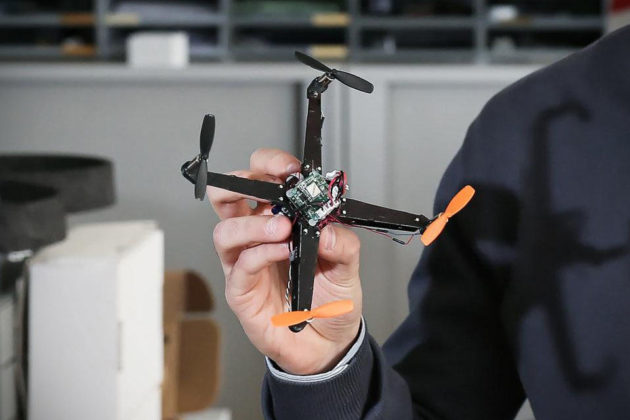 Magnets are used in the joint to ensure the arms stay locked. The rapid unfolding is made possible by the momentum thrown out by the spinning rotors, which also allows the drone to take to the sky in mere seconds. Now that, my friend, is sci-fi made real. For now, retracting the arms still need to be done by hand, but an automated folding mechanism is in the works. With a drone this small, it is obviously not build for carrying heavy payload, but more for aerial surveillance. Many such inventions can be beneficial to mankind, but there’s always a more eery prospect. That said if this were to be combined with the ‘self-destructing’ drone technology, it would kind of make it the ultimate spy equipment. And imagine a swarm of this being deployed to sniff out threat or whatnot… which we are not sure whether is a good or a bad thing.